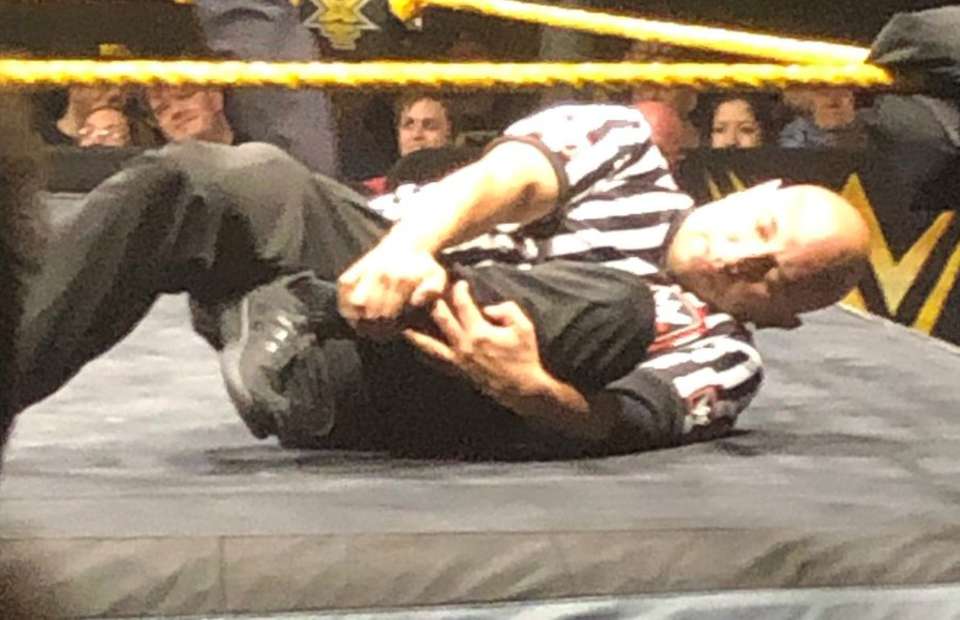 The show must go on.

You read the headline, you clicked the link, you saw the NSFL warning. Obviously you’re about to see a broken leg. If it’s going to keep you from sleeping tonight, look away now.

Here’s what happened to WWE/NXT referee Tom Castor the other night:

That moment you realize your town is cursed. 2 leg injuries in 1 night #NXTOmaha pic.twitter.com/jz1RB8Ymyk

Yikes! Let’s take a look at some more angles:

This ref busted his ankle and still rolled over and made the final count for the pin he is the biggest bad ass of wrestling!!! #NXTOmaha pic.twitter.com/5LsFlBSlNn

Scary news out of #NXT live event.
At tonight’s #NXTlive event in #Omaha, referee #TomCastor suffered a broken leg during the main event between #VelveteenDream and #TylerBreeze.
Broke his leg and still went on with the show and counted out Tyler Breeze #NXTOmaha pic.twitter.com/Lx1YFLZVLp

Not that I expected pro wrestling referees to be weaklings or anything but it’s still surprising to see this man finish his job like an absolute pro when half his leg is hanging off. I’m sure they could have swapped referees or worked out a different finish to the match that didn’t involve a three count but Tom Castor was determined to end things properly.

The man is a hero pic.twitter.com/89543jNjaO

Absolute legend. I say take him off officiating these NXT house shows and let him referee a match at Wrestlemania after that performance. That’s one seriously tough dude.

P.S. Weird how nobody went over to help him or even check on him when his leg is clearly broken in two. None of the refs, none of the wrestlers, none of the technicians, nobody. Oh well, the show must go on I suppose.