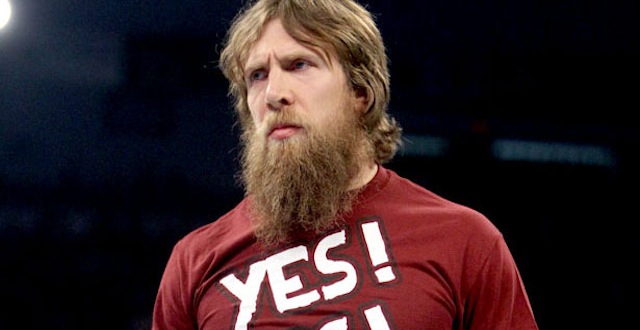 Last night at the Royal Rumble, the WWE completely disregarded the most popular man on the roster in favour of a 45-year-old returning old-timer.

Daniel Bryan is the most popular pro wrestler since the mid/late 90s and the days of Stone Cold and The Rock. Everyone loves Daniel Bryan. In fact often the other wrestlers and personalities trying to speak to the crowd can’t get a word in because the only person the fans want to cheer for is Daniel Bryan.

He’s pretty much a phenomenon and has been for nearly a year, with his “YES” chants transcending the pro wrestling world where they can now be heard in American football/basketball games.

During last night’s title match at the Royal Rumble, all the crowd did was chant for Daniel Bryan. Then, during the actual Royal Rumble itself — the same thing. But Daniel Bryan wasn’t even included in the match. They kept him well away from the Rumble because they wanted the returning 45-year-old David Batista to win it, because… well, fuck knows why.

So they had Batista win the Royal Rumble, and incredibly they thought the fans who have been clamouring for Bryan to rise up over the last year would be okay with it. Instead the crowd took a giant shit all over the proceedings and rightfully so. When the final clock countdown came up and people were sure that Daniel Bryan was going to be the #30 entrant, only for fucking Rey Mysterio to run out there, you could literally feel the arena deflate through your TV.

The crowd spent the rest of the night booing the shit out of everything that was happening.

If Daniel Bryan had come out at #30 and won the Royal Rumble, guaranteed it would’ve been one of the most memorable moments in pro wrestling history. It would have been the perfect pro wrestling moment which so rarely comes about in this day and age, but they refused to let it happen even though it’s all anyone wanted to see. It doesn’t matter that he’s the most popular guy on the show by miles — he doesn’t have a movie to promote or whatever like Batista, Rock and all the other old-timers who get favoured over talented youngsters like Dolph Ziggler and Daniel Bryan.

Even Mick Foley — who played Mankind — thought it was ridiculous:

Does @WWE actually hate their own audience? I’ve never been so disgusted with a PPV.

It was an absolute disgrace to the industry and has annoyed so many people that even the BBC reported on it.

They’ve got a couple of months to fix this before Wrestlemania in April – otherwise the WWE could have one huge PR disaster on their hands.

20 Astonishing Photos Of Andre The Giant

The Most Devastating Pro Wrestling Moves Of All Time: Part One