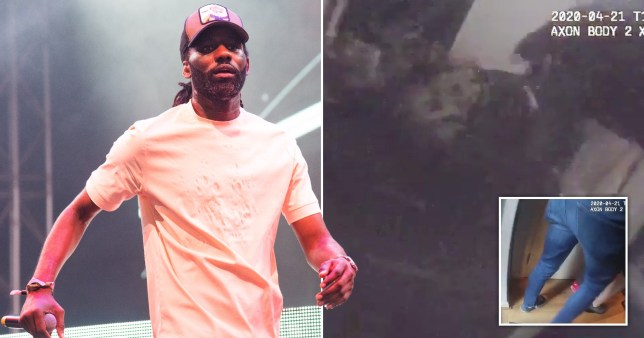 He could’ve broken his back.

More discussion around police brutality this morning as London rapper Wretch 32 shared a video onto Instagram of police barging into his 62-year-old dad’s home in Tottenham, north London, and tasing him, causing him to fall down the stairs.

Metropolitan Police released this statement over the incident on their website:

At 19:40hrs on Tuesday, 21 April officers attended an address in Bromley Road, N17, to carry out arrest enquiries as part of a long running operation to tackle drugs supply linked to serious violence in the Borough of Haringey.

A 22-year-old man located inside the address was arrested and later charged with encouraging another to commit an offence under the Serious Crime Act 2007.

A 52-year-old woman was also arrested at the scene on suspicion of obstructing/resisting a police constable in the execution of duties but was de-arrested at the scene. She was subsequently charged with the offence after being interviewed by police under caution at a later date.

As officers entered the premises, a man came downstairs and started moving towards an officer suddenly. He was ordered to remain where he was but continued towards officers who, after several warnings, deployed a Taser.

The man was not arrested, but was assessed by the London Ambulance Service at the scene. He did not require further medical treatment.

Officers from the North Area Command Unit have liaised with the family to discuss any concerns they have about the incident.

The incident, including body worn footage, has been reviewed by the Met’s Directorate of Professional Standards and no indication of misconduct has been identified.

So no misconduct as far as they’re concerned. Commander of the North Area Command Unit, Treena Fleming added:

I can understand why any use of Taser can look alarming – that is why it receives heavy scrutiny – which we welcome.

Met officers are highly trained to engage, explain and try to resolve situations, using force only when absolutely necessary. We examine our processes regularly to ensure Taser is being used in an appropriate manner.

This incident has been thoroughly reviewed by our professional standards department and no misconduct has been identified. I continue to talk to the family about their concerns.

Reaction on social media has been mixed:

this is vile. brother I pray he’s recovered and your family gets the justice they deserve.

Prove this was down to racism

Its awful to watch. But i dont see why everyone is screaming racism here. It sounds like a scuffle is happening and then this terrible accident. All those officers should be wearing body cameras so that should sjow exactly what happened. Everyone jumping to conclusions here.

Turns out Wretch’s dad, Millard Scott, is OK after the fall, but I wonder if the outcome of the review would have been different if he broke his back or ended up paralysed or worse after that fall. Whether it was an appropriate use of force or not, not the best look for the Met having this footage circulate at a time like this.

To watch a uni student get tasered by a police officer for calling him “pussy”, click HERE.