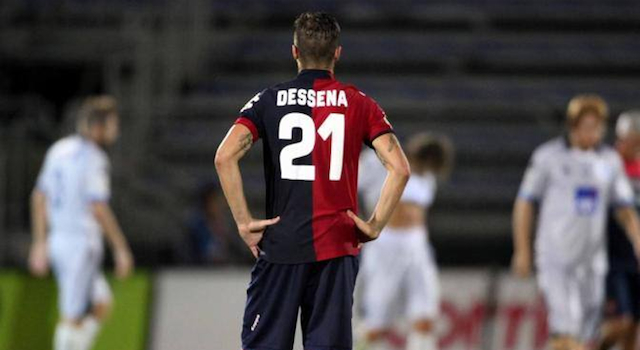 Daniele Dessena from Cagliari was guilty of pulling off one of the most spectacularly bad shots of all time in Monday’s match against Roma.

In Monday’s Italian league match between Cagliari and Roma over in Serie A, midfielder Daniele Dessena was guilty of what could definitely be called the worst shot of all time.

Normally when we feature one of these it’s some guy skying it over an open goal or hitting the post from one yard out or something equivalent but Dessena’s effort is all about bad decision making, bad positioning, bad body shape and above all a completely horrendous technique.

Midway through the first half, a Cagliari attack was cleared by Roma and it fell to Dessena in the middle of the pitch about 35 metres from the goal. His first instinct was to try and twat it towards the goal. Unfortunately for him he got it completely wrong and it ended up about going out for a throw about five metres in front of him. Embarrassing doesn’t even cut it.