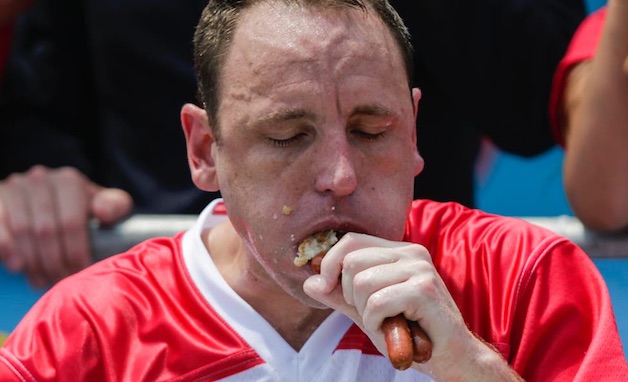 Competitive eating looks kind of fun, but anyone who has ever tried to do one of those challenges in a restaurant and thinks they’re all that will know that it’s much, much easier said than done and these guys really are athletes, even if it’s in a looser sense of the word.

This has been emphasised even more after I read this interview with Joey Chestnut, who just scored his 14th victory in Nathan’s Hot Dog Eating Contest after chomping down on 76 hot dogs and their buns inside ten minutes. That’s an elite performance right there.

However, despite the glory that Chestnut achieves through his performances, it sounds like the aftermath is a real ordeal: 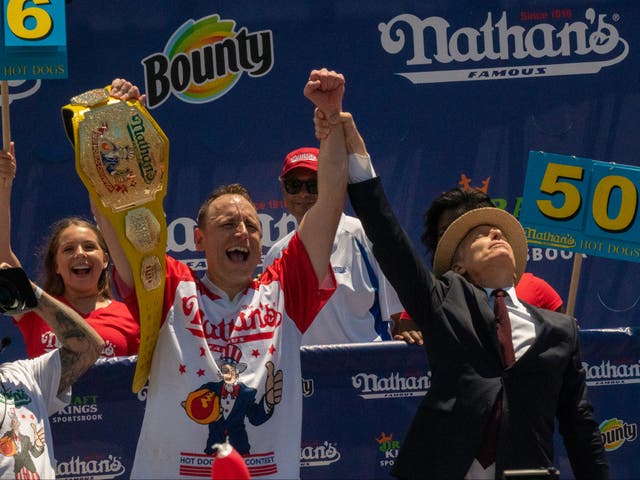 People have told me they can smell the hot dogs.

I really can’t, but the sweat afterwards, it feels sticky and greasy.

My girlfriend says it smells different.

I’m left feeling really bloated and tired. It’s kinda of like after Thanksgiving – it’s kind of like that, except really, really bad

If you eat a lot of food, you’re going to go to the bathroom.

It’s natural and usually happens four hours after the event.

I usually do a two day cleanse before where I only drink water and lemon juice.

Most people, when you eat food, it takes nine to 10 hours to really digest it but after I do a cleanse, things are moving quickly.

It takes me two days after a competition to feel normal again.

Well, that sounds absolutely horrible doesn’t it, but I suppose these are the sacrifices that you have to make if you want to become the 14 time champion in Nathan’s Hot Dog Eating Contest. And Joey Chestnut has absolutely smashed that and should be proud of that – as well as the fact that his girlfriend still wants to hang out with him even though he smells like hot dogs all the time. Major hero.

For more of the same, check out this guy who died after entering a cockroach eating competition. RIP.