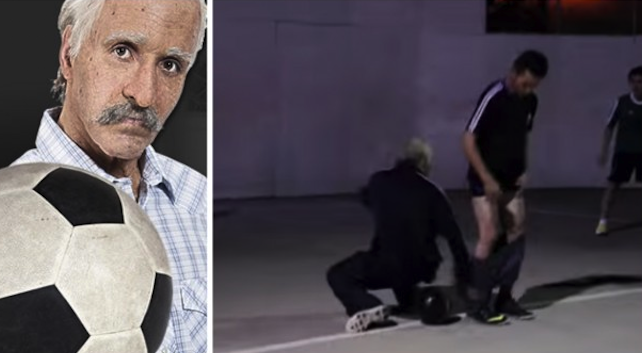 Sean Garnier and the makeup team behind Bad Grandpa teamed up to make a bunch of Mexican punks look really stupid.

Mexican department store Coppel hired world champion football freestyler Sean Garnier and the makeup team behind Bad Grandpa – which managed to pretty convincingly turn Johnny Knoxville into an old man – so that he could punk a group of young kids with his skills on a court which is apparently in Culiacan which is somewhere in north west Mexico.

Although the whole video does look kind of staged and isn’t really that realistic – I mean how many times have you played football against a guy who’s all about the tricks and how many times has he just fucked up and pissed everyone off because tricks don’t actually work in an actual football match all the time, which is why this guy is a champion freestyler and not playing in the Premier League – it’s still a sweet idea that works well, especially around people that don’t like football. Unfortunately considering it’s a Mexican advert, that probably isn’t much of the target audience.

Still it’s an idea that gets people talking, and it seems to really thrill the members of the crowd who probably weren’t in on the joke. It’s worth watching the whole video for his dumb celebration at the end too.