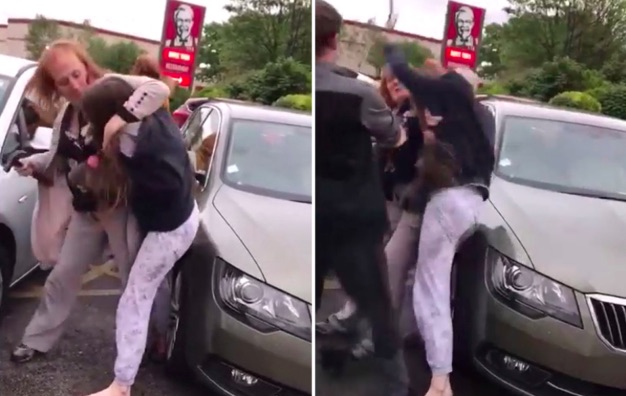 Just another day in Liverpool.

It’s safe to say that anyone who parks their car over two spaces is a bit of a d-bag, especially if that space happens to be a disabled one.

However, does such a thing warrant a hammer blow to the head? That bit is up for debate. Clearly one woman thought the answer to this question is ‘yes’, as she did exactly that when a young couple parked sideways across two disabled bays outside of a KFC in Liverpool.

Someone was, of course, on hand to film the whole thing, which they uploaded under the title: “When you park in the disabled bay of KFC and you’re not disabled, and it causes murder”.

As you’ll see in the footage, a brawl unfolds between a number of people outside of the fast food outlet, before an older woman with red hair holds the girl in a headlock while going to attack with a fuckin’ hammer. Bit extreme.

Refusing to back down, the younger woman grabs the hammer and retaliates, beating her opponent repeatedly… with her UGG boot. Classy.

Apparently the couple only parked there so that the man could “run in for a wee”, as he explains in the video. I don’t think anyone predicted such a small thing would descend into such chaos. Some people just have no chill.

Officers are now looking into the incident, with a spokesman for Merseyside Police saying:

Officers were called to Stonedale Retail Park to reports of an altercation in a car park near to KFC, and threats being made by a woman in possession of a hammer.

The older woman in the video, confirmed to be 55, has since been charged with possessing an offensive weapon and is released on conditional bail – the investigation is ongoing.

From the north to the south, check out this video of a city boy getting knocked out with a brutal KO punch at Waterloo Station.