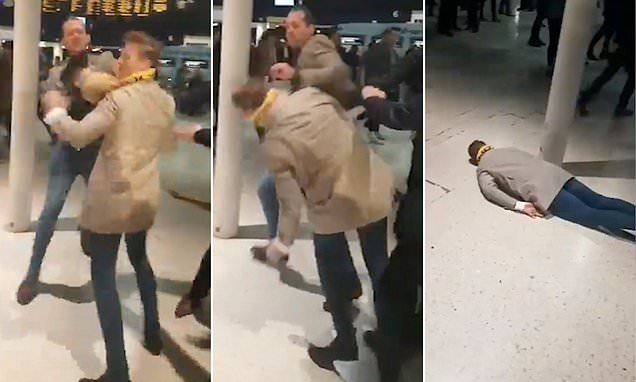 A fight unfolded at the ever-busy Waterloo station this week, when a group of city boys who appeared to be travelling back from the Betfair horse races turned on each other.

This is London we’re talking about and we’re living in 2019, and so of course there were numerous bystanders on hand with their phones out ready to film the whole ordeal.

One Twitter user uploaded the video alongside the caption, “couldn’t believe my eyes when I recorded this.”

I’ll bet – as you will see in the video, when the men exchange angry words, there’s a blur of smart jackets, brown shoes and blue jeans (seriously, it’s like they planned this), not to mention the yellow Betfair scarves.

Soon enough, one of the guys decides to settle the argument with his fist, aiming a solid blow to the guy getting in his face. Looks like even the one delivering the punch didn’t expect it to be a KO situation, but boy was it. As soon as his knuckles touch the dude’s face it’s lights out and he is on the floor.

U couldnt believe my eyes when i recorded this 😂😂 pic.twitter.com/GcGb0MTOO3

At the time of writing, no one actually knows if anything’s been done about the attack, or even if the guy is okay, although a number of news outlets have contacted the British Transport Police so here’s hoping they get to the bottom of it soon.

For the time a Russian doctor literally killed one of his patients with a KO punch after he assaulted a woman, click HERE.