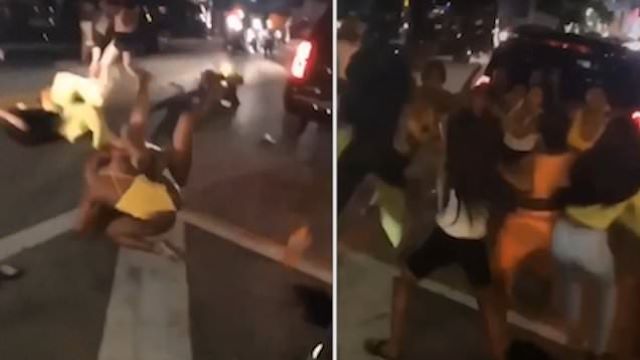 What the hell is going on in Miami?

What the hell is going on in Miami right now? It seems like a month ago it was the place to be with Spring break kicking off but now it’s turned into a Worldstar Hip Hop wet dream with riots and fights kicking off and police imposing curfews around the city.

Get a load of this madness from the other night:

Better than the Royal Rumble! In fact if you search ‘Miami Beach’ on Twitter you can see a whole lot more craziness going down – it’s pandemonium out there!

Police officers move in on a crowd of partygoers as many take off running in Miami Beach, Florida, after another wild weekend of near-record crowds. One person was detained. https://t.co/SLsWbwMQel pic.twitter.com/COpf8uQaTm

SPRING BREAK IN MIAMI: The City of Miami Beach declared a State of Emergency over the weekend and enforced a curfew after thousands of people took over the city for Spring Break. pic.twitter.com/lLtT7aC1Qm

Actually looks like a hell of a time to be fair, but you just know it’s always only a matter of time before there’s some drama and the police get involved and a video of you getting knocked unconscious winds up on the internet for all eternity. Although I guess beating each other up in the streets is more normal than being locked down for 365 days, so at least Miami has that going for them.

To watch a teenager come flying off the table at Chipotle with a vicious WWE style elbow on his opponent, click HERE. Someone get Vince McMahon on the line!