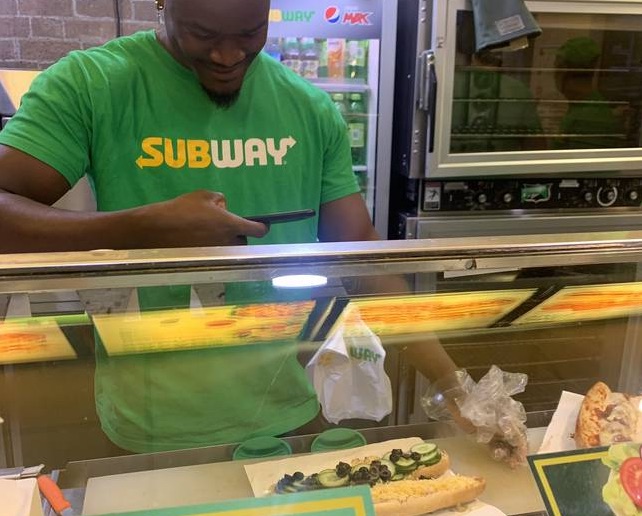 I imagine that when you work in Subway making sandwiches all day, there aren’t too many different variations on what people come in and order – you’ve seen them all – so it’s probably going to be something really special to make you stop and take a picture of the sandwich on your iPhone.

This is exactly what happened when 20 year old Anna headed into her local Subway during infamous Leeds pub crawl The Otley Run at around 8:30pm last Saturday. She’s a vegetarian but even so her choice of a cucumber, olive and cheese sandwich raised a few eyebrows and prompted the sandwich artist to take a picture of it.

Here’s what Anna told LadBible about her unconventional Subway:

We were both pretty tipsy and I asked the workers how it worked. I told them I’d never had a sub before and they were really nice.

We were just joking for a while before we ordered.

I only wanted a cheese and cucumber sandwich which made them laugh and they kept offering me more fillings or sauces.

Then I saw the olives so was like, ‘Those too, please.’

The workers were all super friendly and were bantering with me and my friend. [The man serving them] asked if he could take the picture.

I mean to be fair it is kind of intimidating the first time you go into a place like Subway and you don’t really know how the system works, but even so the order is completely and utterly weird and it’s no surprise that it went viral after the sandwich artist tweeted about it. Definitely won’t be trying that flavour out next time I head there – Subway Melt all the way mate.

For more of the same, check out four reasons why Subway is complete and utter garbage. Seriously.