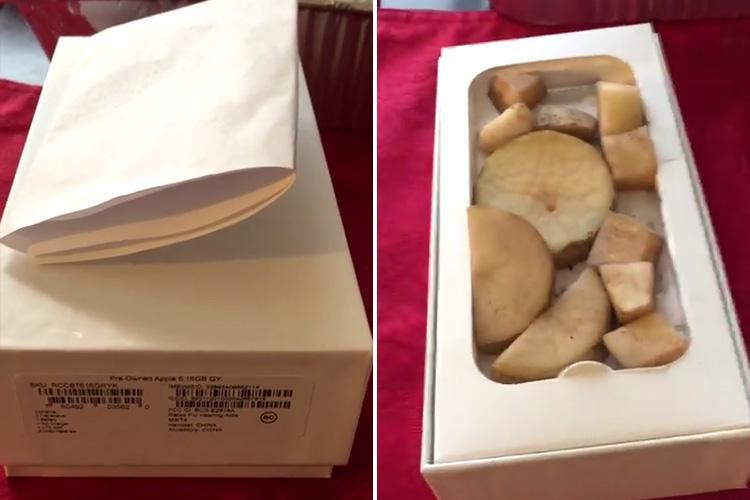 Black Friday is coming up and it’s a surefire way to get your hands on a lot of expensive items for way cheaper than usual, but it’s important to make sure that you’re actually getting what pay for.

Unfortunately for one woman in Milwaukee, she got well and truly duped in what could be described as the scam of the century as she ended up forking over $100 for what she thought was an iPhone 6, but instead turned out to be 11 potatoes. Here’s a video of her story and a shortened version in text:

I decided to go get some gas before church and saw a truck that was selling items on it, with a sign that said Black Friday sale, so I pulled over.

They had everything on the truck that I can name ,such as hair, watches, shoes, clothes, laptops , cell phones, socks, DVD’s and CD’s.

I asked the guy about the iPhone 6 that he was selling and he said if I buy it today, he’ll give it to me for $100.

I had the phone in my hand and I asked him to call it, the phone rang.

Then, after I paid him he turned around as if he was putting the phone in the box, I didn’t know until I got home, to open my new phone box to cut up potatoes.

I never went back out looking for him because I blamed myself for not rechecking the box and it was funny to me.

I mean is it really that funny to get completely ripped off and embarrassed like that? I mean it’s funny for me but it probably wasn’t that funny for her. I guess it’s kinda good she can laugh at it though?

Even though the guy is a major prick for ripping him off though I’ve gotta give him some props for sticking an Android cable in there with the potatoes. That really is the piece de resistance of the joke.

For more potatoes, check out these ones that are shaped like penises. Jokes.