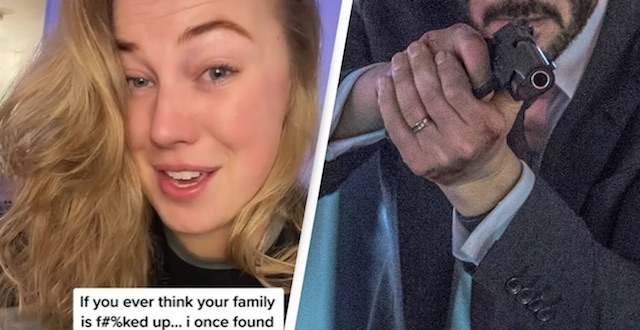 I’m sure almost all of us have had arguments with our partners at some point where we’ve felt like we want to murder them, but I doubt any of us have gone so far as to hire a hitman to sort that problem out.

Apparently it’s not that uncommon for people to ‘accidentally’ order a hitman to murder their husband though, as we can see in this story that was told on TikTok by user Maxime. Take a listen to it below:

If you ever think your family is f*cked up, I once found out at a Christmas dinner that my step-mum once accidentally sent a hitman after my dad.’

The only reason my dad is still alive is because said [the] hitman was shot in an unrelated gang incident before he could get to my dad. And apparently this is something we all just laugh about now.

My step-mum had a lot of criminal friends growing up, and one night after her and my dad had a fight, she went to a bar where all these friends were to go and vent about what my dad had done.

One of these friends took this venting the wrong way. It was more of an unfortunate miscommunication with a criminal friend than it was actively hiring a hitman to kill my dad. But she didn’t realise this until much later. But by some weird coincidence, this guy ended up getting shot, so nothing ever happened to my dad. Now, we can all laugh about it.

Ha ha sure. Dunno about you but something about that just doesn’t add up – how did they know this hitman was going to kill her dad if he ended up getting shot? I suppose he may not have ended up dead and talked about it afterwards, but that’s still gotta be kind of a weird flex for everyone involved even if they can ‘all still laugh about it’. Not sure if I believe it but whatever, it’s entertaining now there aren’t any new episodes of ‘The Sopranos’ to watch.

For more of the same, check out this Mexican hitman talking about the single worst murder he’s ever committed. Pretty harrowing stuff.