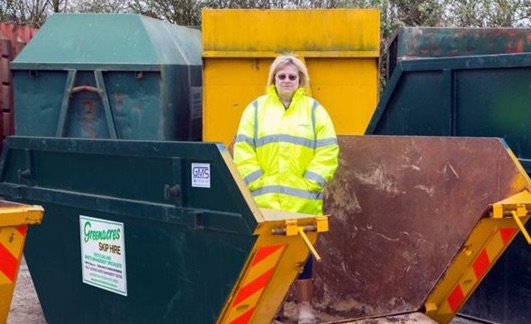 Sometimes very real problems have the dumbest solutions and this is 100% one of those times.

Non Harris runs a skip company with Paul Nicholas and they realised that when they were advertising their skips no customers really had a clue how big they were because they didn’t know enough about the names and models/makes oft he skips. So in order to solve that problem, Nom decided to stand in the skips to give customers a sense of perspective.

Whilst that’s a perfectly reasonable solution to the problem, the fact is she looks pretty damn ridiculous standing in these skips, a fact that was picked up by Radio 1 presenter Greg James and promptly tweeted, causing the pictures to go viral. Here’s what Non said about the situation:

This company has put a woman in their skips so you can work out how big they are and it might well be my favourite thing ever#SkipLady pic.twitter.com/sBUlcOxdy0

We decided to update the website as the old one was very outdated.

Since I’d started working here, I’d realised that a lot of people have no idea what the sizes meant and how big the skips were.

I asked Paul if someone was available to stand in the skips and he replied with “it’s your idea, you stand in them”, so that’s exactly what I did.

I never thought that a woman stood in a skip would become a meme in 24 hours.

It’s been bonkers, but if Greg James said it was his favourite, he can’t have many nice pictures.

I mean that is a fair point really but if you look at these pictures you’ve gotta realise how dumb and silly they are. Hopefully all this extra publicity is helping them to sell more skips than usual as well. We can but hope.

For more of the same, check out this guy who got busted for skipping work in the comments section. Unlucky.