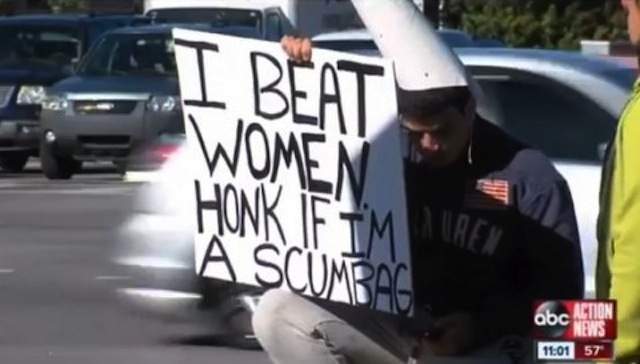 Instead of going to the police and sending the guy to jail, this woman chose to make him sit by the road in a dunce cap.

A 20-year-old woman who received a broken nose and concussion at the hands of a man whose sexual advances she spurned in the back of car had his fate in her hands. But instead of going to the police and sending the guy to jail, she chose to make him sit on a stool on the side of the road, wearing a dunce cap and holding a sign reading “I BEAT WOMEN. HONK IF I’M A SCUMBAG”.

Alisha Hessler said: “He’s doing it because he doesn’t want to go to jail. I can either press charges and have (him) arrested for a year, or I can have (him) sit outside at a busy intersection for eight hours holding up a sign that says I beat women.”

Errm, what? Alisha did receive quite a beating so maybe she’s still feeling a little bit woozy from her concussion, but that is just the worst logic possibly of all time. A man who batters a woman (on their first date, no less!) deserves to go to jail — end of story. That’s what jail is for –  to get pricks like him off the street. Not that the shaming thing isn’t humiliating for him but I’m not too sure of sitting there and playing on his phone is enough to get this guy to stop beating women.

At least cut a hole in the sign and make him stick his face through it – now that’s justice.

â˜› Up Next: Picture Of Suspect Attacking Women With Hypodermic Needles In Birmingham