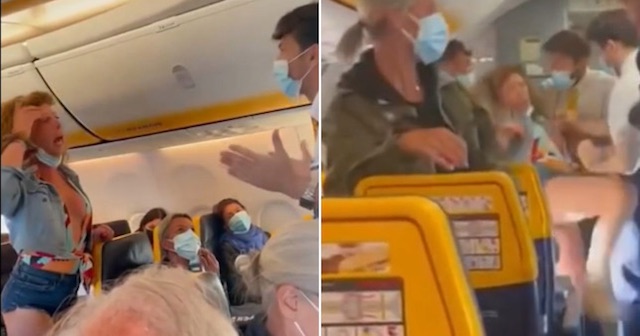 The country has started to open up after the lockdown and some people are even starting to take their annual summer holidays, but unfortunately you’re still required to wear a mask on most flights and some travellers just aren’t happy about that rule whatsoever.

The Italian woman in the video below was flying back from Ibiza to Milan when she was asked by cabin crew to wear a mask and then after she refused went on what can only be described as an absolute rampage. She spits at other passengers, hits them and even pulls the hair of one before being restrained by members of the cabin crew and kicking out at another passenger he tries to help as well.

Geez she could really do with calming down a bit hey? I still don’t get why people are so triggered about wearing a mask that they’re willing to fight everyone and go absolutely crazy and almost certainly become notorious viral internet stars, but it seems like it’s still happening even as we slowly emerge out of lockdown and it hopefully won’t be necessary for much longer. Get a grip, it’ll all be over soon.

For more of the same, check out this anti-masker pretending to be a lawyer and ending up getting arrested for impersonation. That’s a funny one.