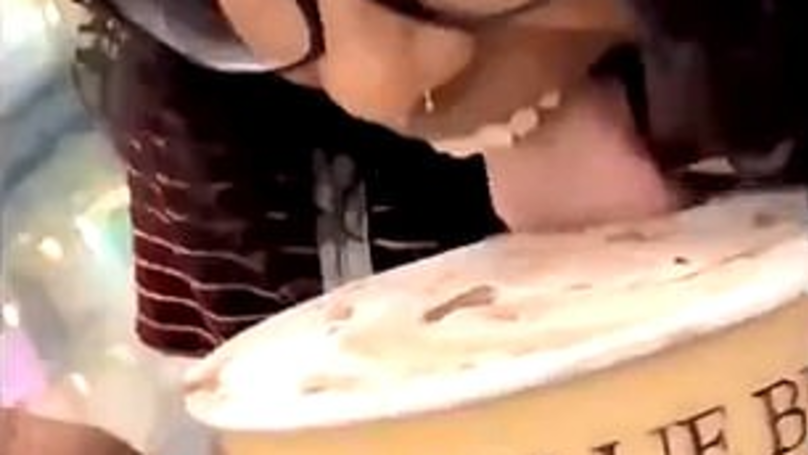 Everyone knows that you can’t pick up some food, take a lick of it or a bite of it and then leave it on the shop shelf for someone else to come along and pick up, but apparently some people didn’t get the memo, even though you learn this when you’re about four years old.

The video below appeared on social media today and features some gross looking woman grabbing a tub of Blue Bell Creameries Ice Cream off the shelf, before whispering into it and licking it and then putting it back on the shelf. Rank:

Ewww. I mean realistically nothing is probably going to happen if you ate that ice cream – sure you might catch some germs but you’re not gonna end up dying or anything – but that doesn’t change the fact that it’s completely rough to do something like that and leave your saliva all over someone else’s ice cream. Not cool.

In fact, it’s so uncool that Blue Bell Creameries have already teamed up with the police to try and track this woman down and charge her with tampering with food. Here’s their official statement:

We want to thank our consumers for alerting us to the recent food tampering incident.

We take this issue very seriously and are currently working with law enforcement, retail partners and social media platforms.

This type of incident will not be tolerated.

Food safety is a top priority, and we work hard to provide a safe product and maintain the highest level of confidence from our consumers.

I mean fair play to them, but in reality you’re not gonna get many people like this gross woman doing shit like this all the time. It’s pretty much a one off isn’t it and after this video has gone viral I doubt anyone else is going to be encouraged to do it, unless it’s actually some kind of dumb new internet challenge. Wouldn’t put it past the world right now to be honest.

For more of the same, check out this ice cream that scientists invented that changes colour as you lick it. If only this gross woman had tried to abuse that type of ice cream.