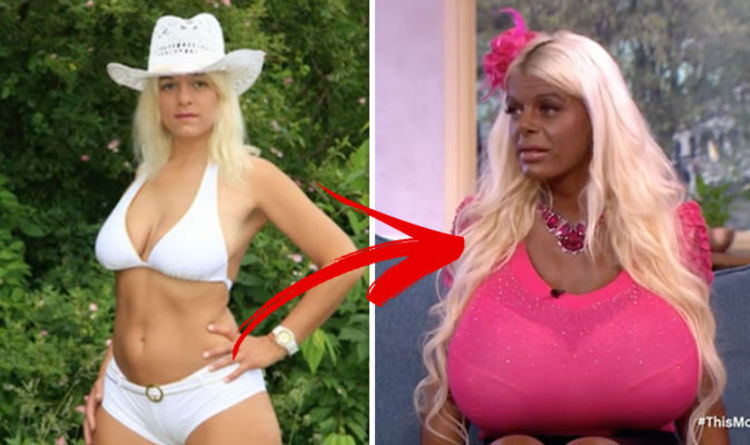 Another day, another time that someone we’ve previously featured on Sick Chirpse for doing something completely stupid returns to announce that they’re doing something else even more stupid. I live for this shit.

Martina Big (yeah I know) was returning to This Morning today to give us all the scoop on how she would soon have the biggest breast implants in the world after her latest round of surgery. Fantastic.

In case you haven’t heard of Martina Big before/don’t remember her, then she is of course the model that claims she changed her race and became black after injecting herself with tanning lotion. What an absolute legend.

Anyway, here’s what she had to say about her latest marvellous achievement:

The actual record holder has nine litres in each breast.

But my implants, the biggest breast implants in the world are custom made and the weigh 20 litres each side.

Step by step, I’m going to try. In the future, it will work for every day.

I’ll consider breast reduction but until then I’m going to go bigger, bigger and bigger!

What an absolute trailblazer. If you watched the video you’ll know that she doesn’t seem too concerned about the effect carrying 40 litres in her breasts will have every day on her back or her lifestyle and I mean why should she? Clearly she’ll be living the dream so probably won’t even notice it*.

*Can’t wait until next time we feature her on the site and reveal that she’s having a breast reduction because she can’t deal with the weight of them.

For more of the same, check out what a woman’s breast implants look like when they’ve been deflated. Yikes.