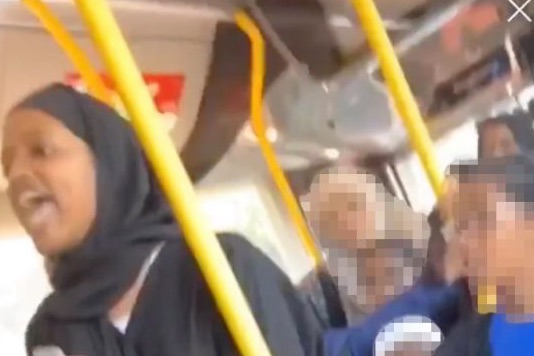 There’s nothing like an overcrowded bus to start a huge altercation between two people and that’s exactly what happened in the video below, where a woman in a hijab launched a racist attack on an Indian man on Saturday.

The pair were travelling on the 195 bus from Romney Road in Brentford to West London when a woman in a hijab and her mother started yelling at the bus driver and telling him not to let any more people on the bus because of overcrowding. An Indian passenger tried to calm the pair down before the daughter – who was wearing a hijab which is normally associated with women who follow Islam – started yelling at him and telling him that he stank of curry and should go back to Southall.

You can watch the shocking exchange below:

Yeah, not really sure what to make of that. It’s one thing when it’s white English people being racist to those different to them, but completely crazy to see it happening between Muslims and Indian people of unspecified descent as you really didn’t think that kind of thing was so prevalent over here.

I’m sure some people will use it as evidence that all Muslims are scum and need to be deported or whatever but it just saddens me as it seems like it’s just indicative of how Britain is more broken than ever. Or how it doesn’t really matter what religion or race is, there are some people that are just inherently bad out there and that has nothing to do with it. Take of that what you will.

For more of the same, check out this Muslimw woman having a massive homophobic rant at a gay pride parade. Fantastic.