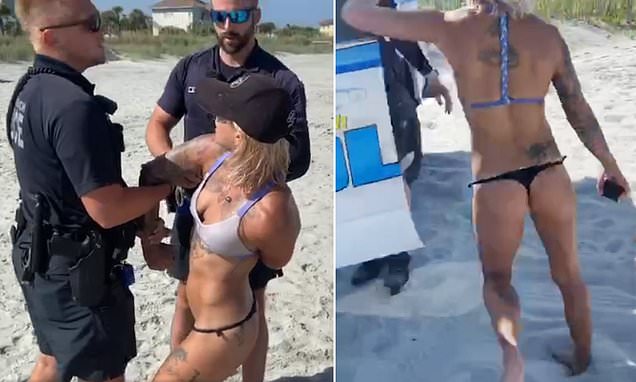 These cops have no idea what they’re doing.

An acrobat named Sam Panda was detained by Myrtle Beach police for wearing a revealing swimsuit, which they claimed violated laws against being nude in public.

Sam told TMZ that “some Karen” called the cops on her for her bikini, and instead of using their common sense when they turned up and saw no private parts on show, the police actually handcuffed her, which led to a massive debate between the police and Sam/her beach lawyer friend on whether Sam broke any rules or not:

How weird was that? I think the police sorta knew right after they handcuffed her that they had no grounds to do so, which is why one of them admitted she was being arrested because of how “she acted” i.e. standing up for herself.

The law says you can’t be nude in public, but anyone with eyes can see that Sam Panda isn’t nude. OK she’s wearing a super revealing thong but that’s not the same as having your vagina or butt crack on show. Cops should have clocked that straight away and just gone about their day as normal. In the end, they basically handcuffed her because some gross lady who could never pull off a thong in a million years was “offended” nearby. What a waste of everyone’s time!

Pretty much the same thing happened to this tourist over in the Philippines last summer (NSFW) – except she had to pay a fine as well.