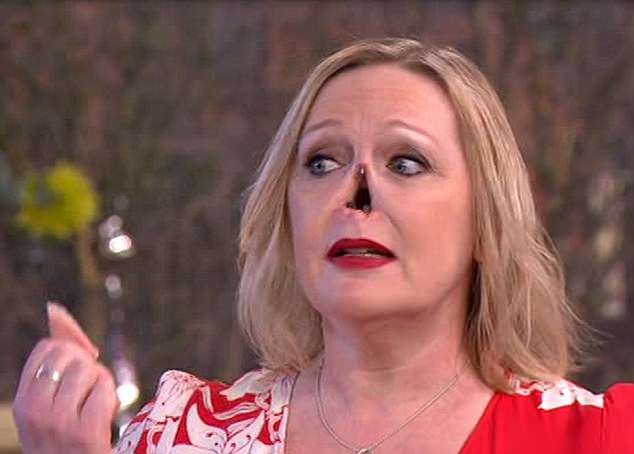 Her nose was destroyed by autoimmune disease.

It’s not often that you meet someone who has a fake nose because their’s has been completely destroyed, but This Morning viewers were treated to the image today when Jayne Hardman appeared on the show.

Hardman was diagnosed with a rare condition which caused her nose to deteriorate after her dog Cece jumped on her and bit her nose. It started bleeding but wasn’t broken, but despite this the swelling remained and wouldn’t go away.

Eventually doctors realised that the trauma of the dog bite and triggered granulomatosis within Jayne which had previously lay dormant – sometimes a shock can set it off. Her granulomatosis is an autoimmune disease which attacks body tissue and slowly eats it away and after a few months her nose was completely gone from her face.

This led to Jayne suffering from mental problems associated with the stigma of not having a nose, but thankfully she has now conquered these thanks to a magnetic nose that she now wears at all times. Not only is it virtually indistinguishable from a real nose, but it also lets her smell and breathe.

She can also take it off whenever she wants, which she does so in the interview below. Be warned, it’s a pretty gruesome and out there sight, so make sure that you’re ready:

Told you it was gross. But fair play to Jayne for going on national television and raising awareness about this disease and how she conquered it. It may only affect 11 in a million people, but damn I bet you’re gonna need some help getting through it if happens to them and this video is sure to provide that.

For more noses, check out this guy who cut off his nose and tattooed his face to look like the Red Skull. Dangerous.