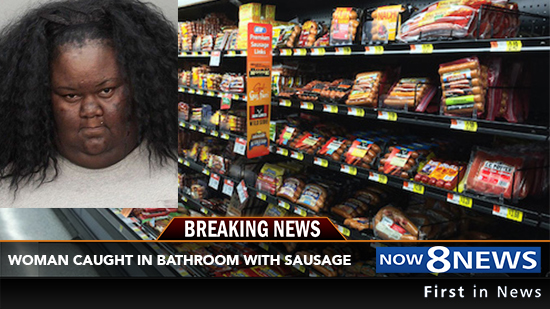 You’ve got the feel for the security guard.

Shaniqua Johnson, who’s probably a supermodel in her spare time, was arousing suspicion when security cameras filmed her hiding sausages up her shirt before heading to the bathroom for thirty minutes. To be fair, it was like a whole pack of sausages.

The security guard, who was probably not expecting his shift to unfold like this, tried several times to enter the stall,. After several tepid, unresponsive knocks he announced he was entering. Big mistake. The guard said what he saw would “haunt his dreams forever”. Even more amazing is that Shaniqua didn’t even stop, “she just stared at me and kept going”, which I personally think is kind of flattering to the security guard to know he elicits as much sexual arousal as a pack of uncooked sausage meat.