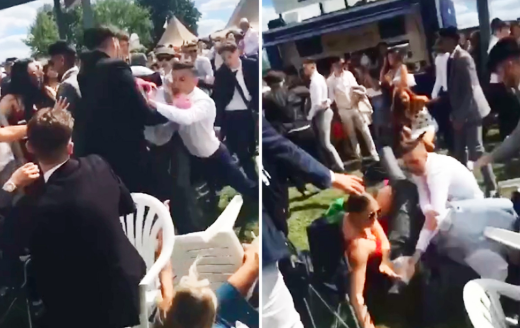 Last week marked the Royal Ascot races, an annual event that is equally synonymous with sartorial elegance as well as drunken debauchery – we were lucky enough to share the tube with a number of attendants Friday night and let’s just say that it looked like one helluva mash-up.

And while everyone was dressed in their finest, you put that many Brits and booze in one place and you’re asking for chaos.

This was the case over the weekend when a huge brawl broke out between a massive group of suited up men – and a few women by the looks of things too.

As you’ll see in the footage, the fight explodes amongst the crowd, leading to a few innocent bystanders – including one woman sitting on a chair minding her own business – to get floored by the carnage.

The brawl went down on Friday night at Ascot’s Windsor Enclosure, the economy section of the Berkshire racecourse, not far away from where the Queen was cheering on her two horses.

There is always fisticuffs at big events like this when the drink is flowing but this one looked really nasty.

Looks like a huge mess of flailing limbs and too much testosterone. Shocking? Yes. Surprising? Not so much.

This happens every year and while a racecourse spokesperson said they had “stepped up security considerably since last year”, a brawl or two is as inevitable as those stupid hats.

Speaking of which, check out 2017’s shining moment – when an angry drunk dude whipped off his shirt and started a massive brawl.