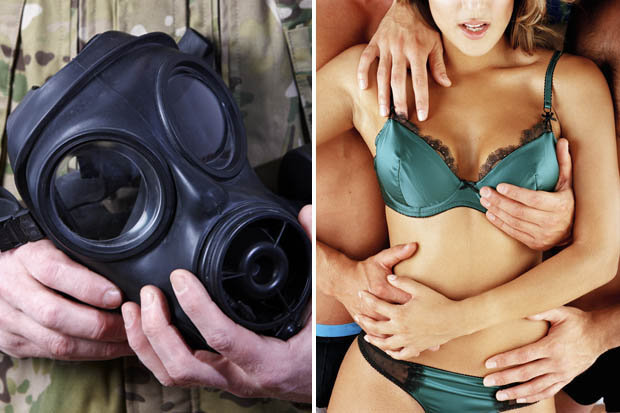 Bulford Barracks in Salisbury is at the centre of a sex scandal today as it emerged that footage of up to seven officers there having sex with a 20 year old woman on the same night with many of them wearing masks as they engaged in it had emerged.

Here’s what the woman said:

Me, James and Zane went into James’s room and things started happening.

I didn’t like it when Corporal Hussain Panchbhaya (pictured above) slapped my naked thigh with his regimental cane though.It was so hard that it brought tears to her eyes.

Hmmm. I suppose that’s one way to get consent – get so many of your mates involved that the woman doesn’t ‘feel comfortable’ saying no.Jesus, I can’t believe that someone even said that or was put in a position where she even needs to say something like that. The fact that she ran from the courtroom in tears when the video was shown probably should tell everyone how she really feels, but it doesn’t seem like anyone’s paying attention to that. Disgusting behaviour from these guys, who are probably all closet homosexuals anyway jerking off their mates ploughing this poor girl.Cpl Panchbhaya was actually found not guilty of battery as his behaviour was simply ‘part of what was happening’. Right, again it sounds like this poor girl got royally shafted over by the whole system here. But what do you expect, it sounds like she’s been brainwashed herself.The army itself has promised that the correct punishment will be administered to those involved, up to and including dismissal. I’ll believe it when I see it.