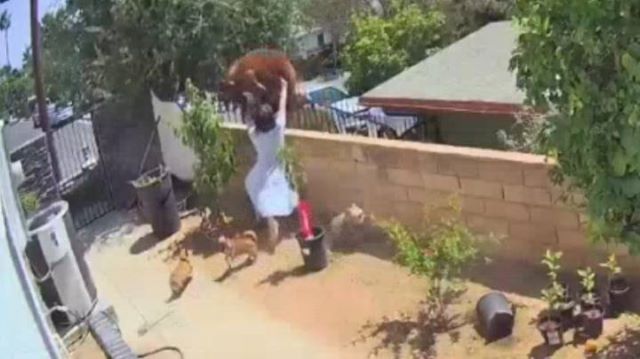 A 17-year-old girl has gone viral for her unbelievable heroics after coming to the rescue of the family dogs as they were about to be obliterated by a bear on the property.

Doesn’t get more ‘fight or flight’ than this, and this absolute legend chose the former:

This is crazy af omg pic.twitter.com/Sh14yVD9Eu

What a hero. I know most people feel like they would do anything for their dogs but fighting an actual bear?! So awesome that she not only had the guts and immediate instinct to do that but also that it’s all on video because there’s no chance anyone would have believed her story otherwise.

Then again maybe it’s not too surprising she chose to rush the bear and throw it off the wall like Mick Foley at HIAC. Can you imagine if she hadn’t? With all those dogs running around it would have been an absolute bloodbath.

The teen, known as Hailey, later explained (via Newsweek):

I was in the mountains so that is actually really normal and it’s summer so they always come now. This is our garden area and the dogs start barking, and I just thought they were barking at dogs, because they always bark at dogs and squirrels or whatever. I go to tell them to stop and when I go over there to see what they’re barking at, I’m like ‘that’s a funny-looking dog.’ By the time I get there, the bear is literally picking up one of my dogs.

I go over to the bear, I look it in the eyes and the first thing I think to do is push it. Push a bear, push an apex predator. To be honest, I don’t think I pushed her that hard. I just pushed her enough to make her lose her balance, so she dropped my dog and I ran out of there. I grabbed my other dog, I sprained my finger and scraped my knee, but we’re all OK.

To meet the man who survived a grizzly bear attack by biting the bear’s tongue, click HERE. He didn’t quite come out of that one unscathed (NSFL).