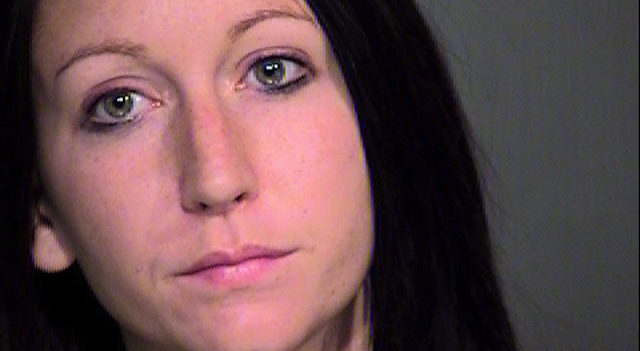 That guy must definitely know what he’s doing if he can make a girl go this crazy for his D.

You gotta please your woman – bear those words in mind this Valentine’s Day (and probably every other day too) as you definitely don’t want to be in the situation that Ashley Marie Prenovost’s boyfriend found himself in in Arizona last Monday.

After her boyfriend denied her sex on Monday afternoon because she was completely off her face, she got completely naked and went completely berserk in the house that the couple share. She punched the walls repeatedly and smashed a glass picture which bloodied her hands she was so angry, as well as running around the house screaming and ranting and raving. All because her boyfriend wouldn’t give her the D. That guy must be doing something right.

More disturbingly Ashley also picked up the couple’s four month old baby and ran around the house with it with no real regard for her safety. She ended up hitting the baby’s head on a dresser, which didn’t have any serious repercussions but could have done and isn’t what you should be doing with a four month old baby in any case.

Police showed up and arrested her and she was bailed until next Tuesday when she’s due in court to face charges relating to aggressive assault on a minor, endangerment, assault with intent to injure, child and adult abuse, criminal damage and disorderly conduct.

â˜› More Sex: This Man’s Homemade Sex Doll Is The Most Disgusting Thing You’ll Ever See