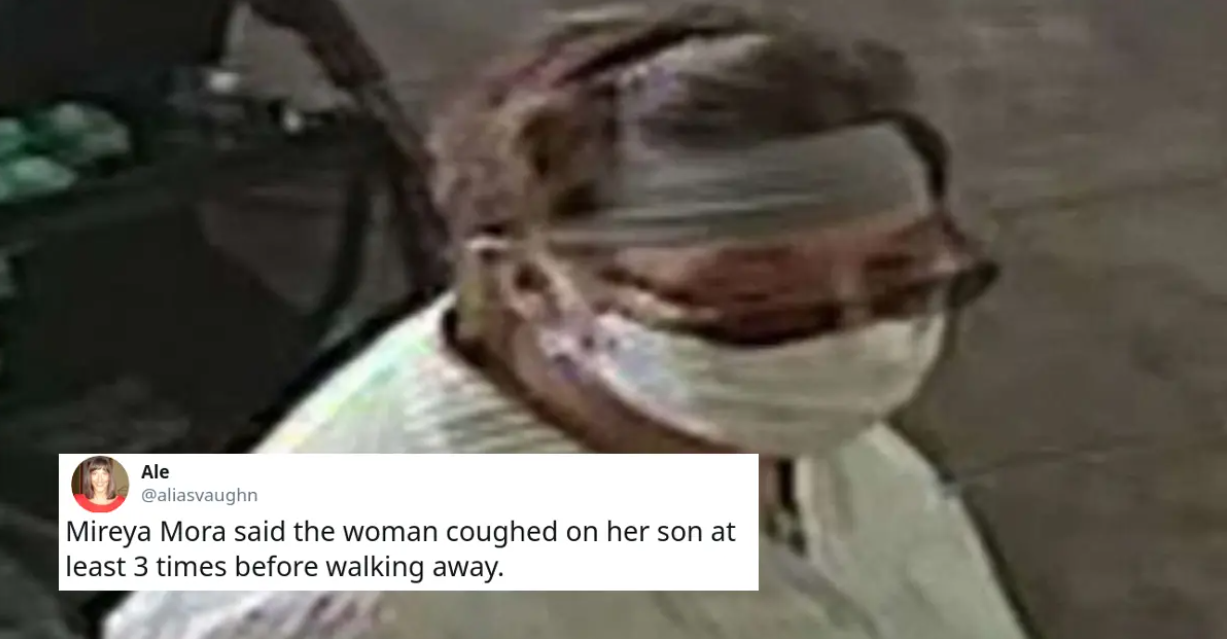 There have been plenty of Karen-esque meltdowns circulating the internet in recent months, with an alarming amount of them featuring grown women coughing in the faces of others, which is bad enough even without a super contagious virus still spreading around the globe.

Well police over in San Jose, California are now hunting a woman who got into an argument with a young mother at Yogurtland earlier this month. The woman was apparently unhappy with this lady, who was pushing her 1-year-old in a stroller, not maintaining proper social distancing.

After arguing back and forth, the older woman removed her mask and intentionally coughed in the 1-year-old toddler’s face. WTF?

Here’s footage of the incident:

Sergeant Enrique Garcia from the San Jose Police Department wrote about the incident in a press release:

The preliminary investigation revealed the suspect was upset the female was not maintaining proper social distancing, so the suspect removed her face mask, got close to the baby’s face, and coughed 2-3 times.

The mother of the child feels the cough attack was racially motivated, as she says the woman only started mentioning “social distancing” when she began speaking Spanish to a relative who was with her. I don’t know about that but either way, it’s completely diabolical stuff.

As an #AsianAmerican who has #Latina & #Latino friends I hope the #racist #Karen responsible for coughing on #MireyaMora‘s baby son is ARRESTED & JAILED for #hatecrimes. GROSS. #COVID19 #HateIsAVirus #BlackLivesMatter #BrownLivesMatter https://t.co/OC8DruyIvp via @abc7newsbayarea

I don’t know what’s going to happen to this woman when they inevitably track her down but they can shoot her into space as far as I’m concerned. And that goes for anyone who purposely coughs in another human’s face, let alone a 1-year-old baby! Absolute dickhead move.

To watch another Karen unleash a MONSTER cough into a restaurant manager’s face after he told her she couldn’t eat her meal inside the restaurant, click HERE.