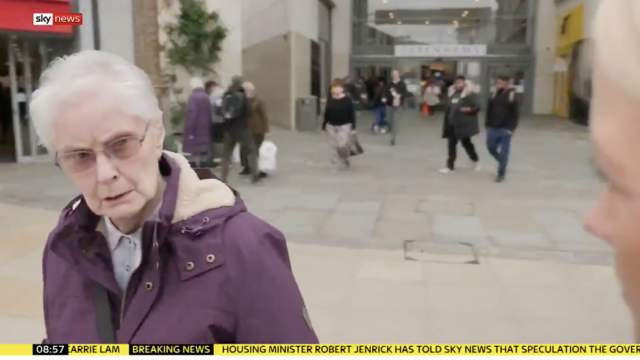 As Brexit continues to rumble on – looks like it isn’t going to happen on October 31st anymore hey! – the country is more divided than ever and the BBC seem to be consistently able to get the most ridiculous quotes out of people in live television interviews that we never thought possible.

The latest comes courtesy of an old woman who was approached in the streets of Uxbridge, which just so happens to be Boris Johnson’s constituency. Clearly she’s no great fan of the current Prime Minister though, as the words that came out of her mouth when asked if she wanted to discuss him were nothing short of obscene.

.@SophyRidgeSky travelled to Boris Johnson’s constituency of Uxbridge and South Ruislip where there is lots of support for the prime minister.

However, not everyone is a fan…

Well, she certainly wasn’t holding back there was she? The look on her face kinda made it sound like it was the most offensive thing that she’s ever said in her life about anyone and the way that she curled her lips up and spat it out and almost didn’t know what to say would kinda back this theory up as well.

Don’t really care if you’re a Remainer or a Brexiteer, that clip is definitely funny. No news on who the woman actually is yet – she was being interviewed on Sky News for the Sophy Ridge On Sunday programme, but hopefully we can find out something about her and she does a follow up interview soon because you know that’s just gonna feature loads of A+ quotes from her. Make it happen Sophy.

For more of the same, check out Nigel Farage having a meltdown on the BBC. Never gets old.