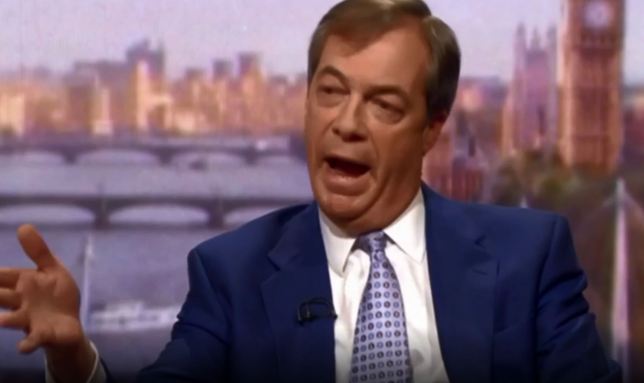 Nigel Farage is back with the Brexit Party and that means that he’s appearing on TV and looking like an absolute idiot way more than he has been recently.

The latest instalment of his idiocy comes courtesy of the BBC and presenter Andrew Marr, who caused Farage to completely lose his cool and accuse him of the worst interview ever after he was consistently asked about opinions ranging from global warming to a second Brexit referendum, often backed up with footage of him discussing them in the past. This was too much for Farage who denied that he said a bunch of things even though there’s clear evidence of him saying so and did that kind of pompous aloof thing he always does when he doesn’t get his own way.

You can check out footage of the interview below:

I mean I suppose in fairness to Farage, it doesn’t really seem like Marr is making that much of an effort to ask him about the European elections which I assume he was brought on to talk about, but in any case he should probably not act as exasperated as he does because the line of questioning isn’t going the way that he wants it to go. Just answer the questions and then you’ll get onto the European elections in good time – you can’t really expect to go onto a show on the BBC and just bark out your agenda like that and then get all butthurt when it doesn’t go down like that. He should really know better.

For more of the same, check out who said it – Alan Partridge or Nigel Farage. What a great game.