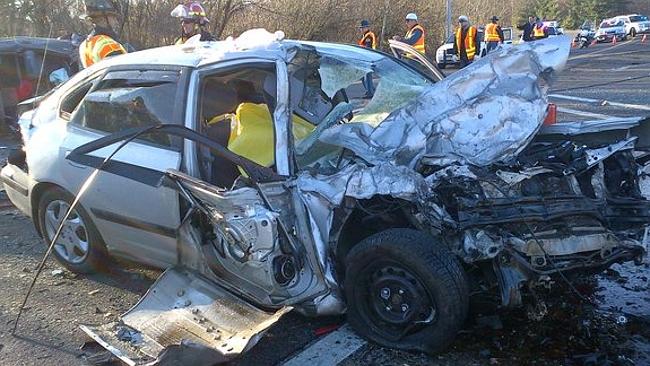 If you’re feeling particularly fragile this morning maybe skip this one because it’s particularly heartbreaking.

In one of the most unbelievably screwed up stories we’ve ever featured, a Vancouver woman who enjoyed tweeting about local news and traffic information under the Twitter handle @scancouver unwittingly tweeted details of a car accident on the interstate that had actually taken her husband’s life.

The tweets took place over a four hour period yesterday and began when @scancouver – real name Caran Johnson – shifted from commenting on the accident to asking local authorities and newspapers for help locating her husband, who had been due home but was late and she knew took that section of the interstate home every day.

Eventually, later – in what can only be described as one of the most horrible coincidences of all time – she discovered that her husband was the one casualty of the accident. There’s a chance that this is a hoax of course, but the fact that @scancouver has over 13,000 community orientated tweets – which she must have taken a while to build up – and seems to be friendly with all the local news agencies would suggest that it isn’t.

Heartwrenching stuff. We hope you’re doing as well as can be expected after that Caran. You can see the full series of tweets below, which started with an interaction between @scancouver and the local newspaper known as The Columbian.

EDIT: Unfortunately Caran Johnson has locked her tweets now so we couldn’t embed and just had to copy and paste them in. Sorry about that.

@Col_cops i hate that section of I205 S. too many on ramps, speeders and too few lanes.

#Clark911 One lane of I-205 is closed. WSP will likely have to block the whole interstate to allow the helicopter to land.

LifeFlight is standing down. #clark911

They said they are so close to SWWMC, they can take the patient there, instead of Lifeflight. #clark911