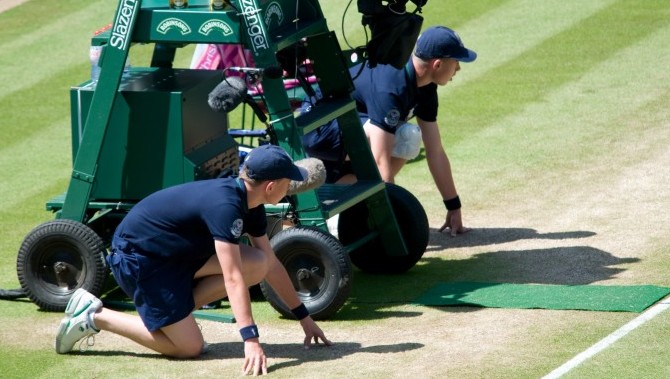 I don’t know if you noticed whilst you were busy watching Andy Murray win Wimbledon, but the ball boys there get a barrage of abuse and they don’t even get paid. Is it worth it?

Wimbledon is a seriously big deal in the UK. It’s all anybody talks about. For these few weeks of the year tennis clubs see a huge rise in sign ups and poshos swarm to the courts in droves sporting brand-spanking-new tennis gear. However, without a doubt the most sickening thing about Wimbledon is the abuse of the ball boys. The fact that the organisers are still able to get away with this exploitation is pretty astounding.

If you’ve ever watched Wimbledon you may or may not have noticed the ball boys (and girls). Two of them crouch on all fours like dogs next to the net, waiting eagerly to run and pick up balls for their masters. The players literally treat them like dog shit, and you can be sure that they are probably nailing the shit out of them in the changing rooms after the game as well.

The ball boys are also expected to offer towels to players whenever they need them. While the player wipes the sweat off his face and walks around the court, the ball boy will face the player and walk backwards, waiting to be thrown the sweat soaked towel. It’s hard not to laugh when you see a player throw their towel viscously at the face of a ball boy when they’re close enough to just pass it by hand.

OK so we’ve established that the job is degrading…but loads of jobs are degrading. They choose to do it and if they’re getting paid a decent amount then who cares? Well no, this isn’t exactly true because ball boys get paid fuck all. The “dogs” get travel expenses up to $300 and they get to keep their gay little uniform. That’s their lot.

So maybe they do it for the bragging rights…although why you would want to brag about being a tennis player’s bitch is beyond me. Or maybe they want to add it to their CV? Or get up close and personal to their idols? Well if this is the case before they get anywhere near the sacred lawn, they need to go through military style training, which takes place at one of the ball boy schools in the UK.

Yeah, ball boy schools, seriously, that’s a thing. Once the training is up only a select few get chosen to be put forward for selection as a ball boy. That’s right, even if you go through all the training crap the chances are that you won’t even get to the next stage. So yeah, it basically seems like it’s a whole lot of bullshit training for a whole lot of nothing.

I’m not suggesting that we get rid of ball boys – just pay them a decent wage and have the players treat them with slightly more respect. Considering the millions that Wimbledon makes each year and the obscene prize money, you’d think they could afford to pay the ball boys/girls a fair wage.

The truth is that because of the “tradition” and “honour” of the role (pffft), nobody is allowed to say anything against it. In fact if you try to search for any amusing videos online of ball boys getting treated like shit – which you see every time you watch a match on TV – you won’t find any. Although I have found a video with more information about the military-style schools they have to attend and the sick teacher, who clearly has some kind of fetish for it.

You can check that out below and hopefully it will put any of you thinking of becoming ball boys off the idea, if this article hasn’t already:

Why I Hate Wimbledon Tennis