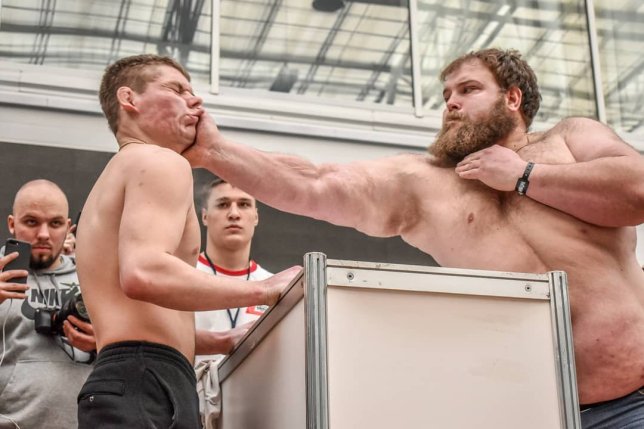 Have you got what it takes?

I never really thought that the ability to get slapped in the face or slap someone in the face was really a skill, but it turns out that it’s a massive one and Russian people are just dying to exploit it and turn it into a massive competition.

Over in Krasnoyarsk, the first ever Male Slapping Competition took place at the Siberian Power Awards. Yes, that’s a real thing.

The rules were simple: both of you stand facing each other and take it in turns to slap each other in the face until one of you gives up. Obviously it has to be an open hand slap and that’s pretty much it.

Get a load of these guys slapping the absolute shit out of each other:

Ouch – that guy looked like he was knocked out cold there. Crazy scenes.

The winner of the whole thing was the massive bearded whose name is Vasiliy Kamotskiy and he picked up 30,000 rubles for his trouble. That’s about £350 so I’m not really sure if that’s worth being slapped in the face repeatedly for hours and hours by really tough Russian men, but I’m sure he’s probably more hyped about being declared the person who can take that the most. Go Vasiliy go!

For more slapping, check out The Ottoman Fighting Slap. That’s one hell of a technique.