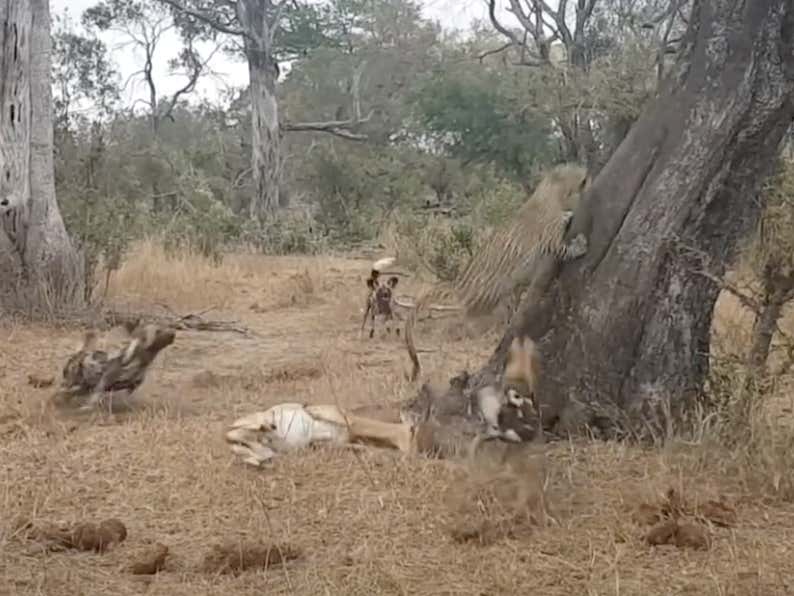 This is absolutely horrific (NSFL).

If you’re into nature videos, Kruger Sightings is a great YouTube channel featuring some of the most fascinating (and violent) nature videos on the internet, and this latest upload is no exception.

It’s basically a 3-way showdown between a leopard, some wild dogs and a bunch of hyenas all fighting over dinner in the form of a wounded impala who you really have to feel sorry for when you see the ordeal it’s put through in this clip.

This video definitely gets a little bit gruesome so here’s your NSFL warning… watch below:

What a scene. All that was missing was a honey badger showing up and taking them all on for the hell of it. Pretty surprising seeing those two hyenas show up and boss that entire crew of wild dogs as they alternated between taking bites out of the impala and fighting them off. Must have known their back-up was arriving shortly after. Meanwhile the leopard who did all the hard work of hunting the impala down is just sitting in the tree thinking “what a bunch of savages”.

The most horrific part of course is that poor old impala being slowly eaten alive by multiple species of predator. I mean fresh meat doesn’t get fresher than that does it? What a way to go. I guess that’s what people mean when they say ‘nature is metal’.

For brutal footage of a leopard literally SCALPING a man in India, click HERE. Jeez!