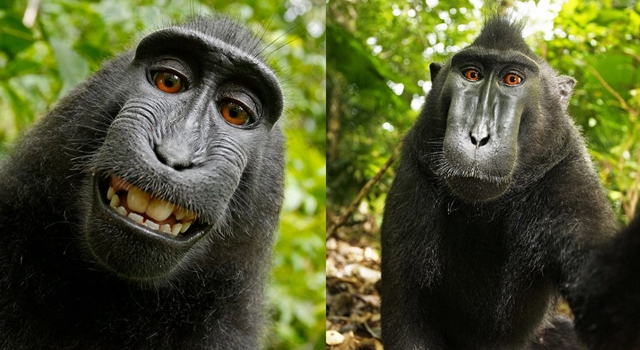 Q: If a monkey takes a picture of itself using your camera, who owns the copyright? A: No-one knows.

Wikipedia monkey selfie row? Quite an odd sentence isn’t it? I’m sure you’ve had the pleasure of seeing that magnificent macaque selfie in the header before. For those that missed it, the picture was taken by the monkey itself and became a news item de jour by combining a likeable image with a dead simple story.

David Slater, a professional photographer from Gloucestershire, was in North Sulawesi, Indonesia in 2011. He left his camera unattended for a moment and the featured crested black macaque grabbed it and took some of his own snaps for posterity.

The story came and went, until now. Wikipedia used the image without permission with a link for users to download and use the high quality image for free. Now Slater (pictured below in more carefree times) is asking Wikipedia to take the image down as he is the rightful owner of the image. Wikipedia are telling him he can frig off, because the monkey took it and the monkey doesn’t mind them using it. Wikipedia says…

This file is in the public domain because as the work of a non-human animal, it has no human author in whom copyright is vested

Slater is saying that it was him who took the time out to go to the jungle, he bought the camera, he set it up on the tripod and cropped the image so it’s his. He says the monkey can be classed as his assistant, if they’re going to get silly about it. Wikipedia say that if anyone owns it, it’s the monkey, but copyright law dictates, quite sensibly, that only humans can hold copyrights, therefore anyone can use it. 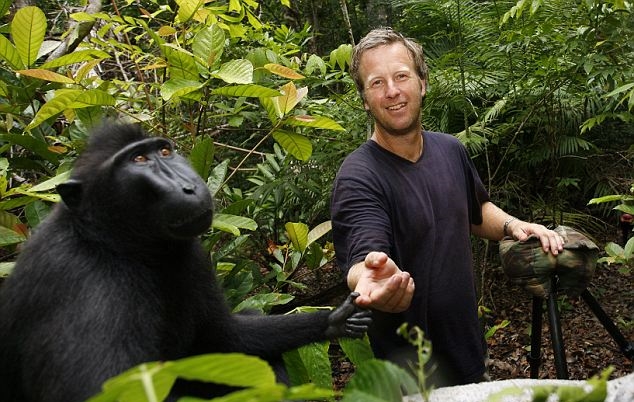 Slater is complaining about loss of earnings and is on the case as far as getting the lawyers involved, so we’ll just have to wait and see how this one pans out. My prediction is that Wikipedia will just go “oh alright, chill out Slater, you can have it back, just stop banging on about it”. Well, that’s what I’d do any way.

Apparently Wikipedia are planning on putting it to a vote by Wikimedia members in the next few days. But if they vote against giving the image back I expect we’ll get a nice juicy courtroom drama about a selfie. Bizarre.