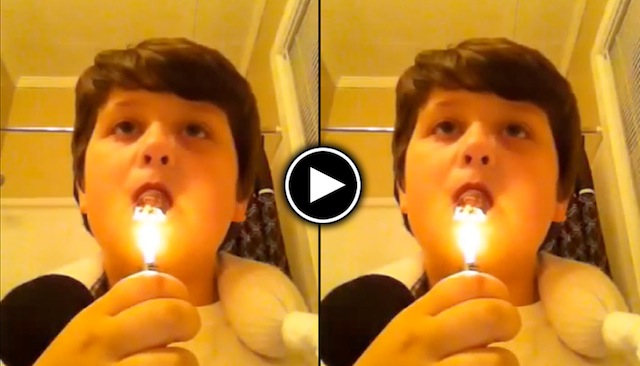 Smoking Twix bars is the new robbing a B&H Gold from your nan.

Instead of stealing cigarettes from their parents or getting some older kids they met at the bus stop to go and buy them a pack like the generations before them, lazy youths these days have turned to a new vice — smoking Twix bars. For those of you who want to try this at home (protip: don’t) all you have to do is get your Twix, bite both the ends off and then light it like you would anything else. There’s even two in a pack just in case you screw up the first one.

This video is proof that humans are actually devolving over time. Also why the hell is this kid opening the video by showing us a sock full of rice? His Mum is going to be well angry when she goes to make dinner and realises her blockhead offspring has used half of the ingredients to create the world’s ugliest draught excluder. She’s going to be doubly pissed when she realises he’s smeared melted chocolate all over her shower curtain. Clearly all the molten biscuit fumes have already damaged his poor pre-pubescent brain.

After an entire minute he finally decides to actually smoke the thing and our lego-haired friend complains about the smell, the taste and he isn’t even inhaling properly so there is clearly no point to this at all. His weird rice sock is draped around his neck like a poor man’s stole. It’s not even filmed the right way round.

As this video shows, there’s no better way to bond with your Dad than kick back in your garden and inhale some burnt Twix together. Props to him though, his son had obviously shown an interest in this crazy fad and he’s probably just trying to experience it himself and see what all the fuss is about, which is more that can be said for some parents. Either that or we’re witnessing a mid-life crisis unfold before our very eyes.

Finally, check out these bad boys — hanging out in a dark car park, talking in hushed voices and generally acting as though they’re up to something super illegal. The main kid with the braces keeps glancing over his shoulder and you almost feel scared that they’ll be caught at any second. That’s before you realise that you’re watching a couple of numbskulls smoking a fucking chocolate bar and you don’t actually care.

If you’re not impressed by the Twix fiasco then maybe you’ll change your mind once you realise that these geniuses also apparently made the world’s first Smarties joint. According to every other “How To Smoke Smarties” video on the internet, they’re definitely doing it wrong which just adds to the second-hand embarrassment. It’s also apparent that Smarties in the US aren’t the colourful sugar-coated chocolates we’re used to in the UK, but seem to be some sort of sour candy with a similar texture to Parma Violets. Though seemingly harmless, students were actually suspended from school in New Mexico this week for snorting the very same sweets.

Doctor Christian Jessen still hasn’t replied to my tweet about the health risks associated with smoking a Twix but I’m guessing it’s not going to be good. Pretty much everyone involved in these admits that it tastes rank and there is no evidence of anyone ever getting high from one. There is obviously no reason for people to be smoking a Twix so please spare a kind thought for all the innocent chocolate bars wasted by these idiot children and that one guy’s Dad.