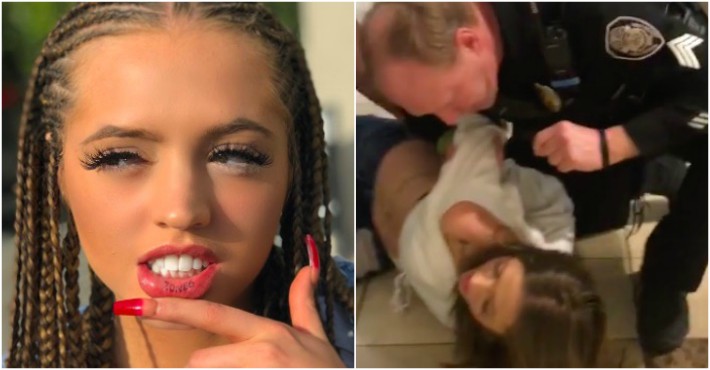 In 2018 it’s often hard to keep up with how people wish to identify and label themselves and one of the latest trends is transracialism.

One of the major figureheads for this movement is social media star WoahhVicky, who was born white but now says she identifies as black. This began when she looked into her family background and found out that she was 25% Subsaharan African, with 10% of her genetics from Mali and 15 % from Cameroon.

Since then she’s faced criticism from the black community for pretty much populating her social media feeds with what many have described as cultural appropriation of their race, with shots of her with her hair in cornrows and grills in her teeth and videos of her saying the n word. It doesn’t seem like she’s got any plans to stop anytime soon though.

Anyway, that’s just some background on her before the real meat of the story. Apparently WoahhVicky was arrested last weekend at the Four Seasons Town Centre Mall in Greensboro, North Carolina on Saturday for what officials are claiming was ‘trespassing’. She was apparently given multiple chances to leave but then the police were called and she was charged with assaulting a police officer and resisting arrest.

Of course, you can see the video of these events via her social media channels:

Damn looks like she got completely murked there by the police. Naturally though, she wanted to put her own spin on it and decided to film the following video of her release from custody where she prances around talking about how she beat up the police and how black lives matter:

Well I haven’t really even got a clue what she was saying there except for the fact that the dude kept shouting Black Lives Matter. Which is great and true of course, but the whole video is just bizarre and weird and just plain puzzling for me, much like the whole world of WoahhVicky.

Love the nonplussed black dude who is just like ‘you guys had a long night, come in’. Kinda like my reaction to the video as well. I’m not gonna get mixed up in a debate saying whether she should be identifying as black or not because that’s a real can of worms, make your own mind up on her behaviour etc.

For more of the same, check out these uni students storming out of a diversity panel after a biologist said men and women were physically different. Trouble makers.