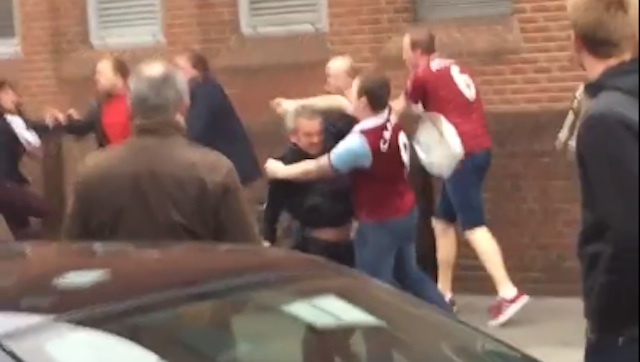 Football violence is dumb enough, but attacking your own fans is just completely stupid.

Football violence has always existed wherever games are played, but it’s unusual that it would occur between the same set of fans after their team had won.

Give it up for West Ham though, because that’s what happened following their 1-0 win against Sunderland over the weekend. Not really sure what they’re kicking off about – maybe the fact that they’ve been really rubbish since Christmas and are probably going to end up about 9th and don’t really have anything to play for for the rest of the season, despite pushing for Europe towards the end of last year, or maybe they’re still upset that Andy Carroll is always injured for them – but it certainly seems serious as they lay into each other heavily outside the ground.

Props to the old policeman for breaking it up and actually managing to scare them off by threatening to throw a punch – he doesn’t look tough at all but somehow it seems to be enough. Seriously though, beating someone up over your team is bad enough (not as bad as decapitating a referee like they did once over in Brazil when stuff wasn’t going their way) but it’s even stupider when it’s somebody that supports your own team. Sort it out guys – we all know the West Ham firm has a bad reputation but this is really dumb.