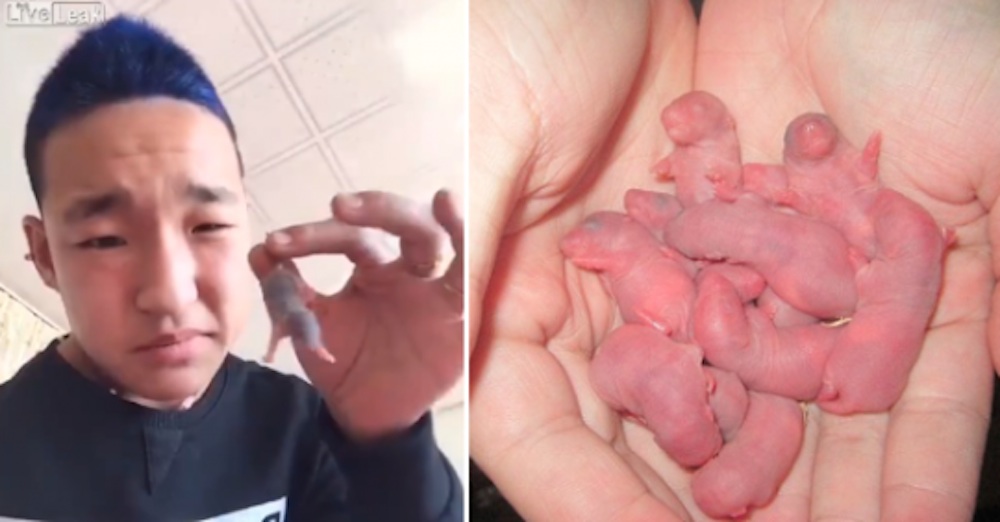 What the actual fuck?

We feature a lot of videos here on Sick Chirpse, and every now and again one comes along that completely beggars belief as to why anyone would ever film themselves doing what is depicted in it. This is one of those.

Some complete and utter weirdo thought that it would be a good idea to film himself eating a live baby rat, and let me tell you it is completely and utterly disgusting. It’s also VERY graphic and actually made me almost puke so if you’re that way inclined I would heartily recommend not watching it at all.

In it, he picks up the baby rat, puts it in his mouth and then bites down on it, causing its entrails to explode out of his mouth onto the camera. It’s seriously gross. He then washes it down with a cider, as you do.

Needles to say, this is absolutely repulsive behaviour and isn’t the kind of thing that should be going on, with or without it being filmed. It’s been roundly condemned on the internet – as it is from us – and PETA have issued the following statement regarding it:

One can only imagine that this person is mentally disturbed and urgently needs to be taken out of the general population and helped for his own sake and that of the community.

Anyone capable of mercilessly crushing a small, helpless animal to death should cause everyone to be concerned, because a lack of empathy and a desire to exert power over the helpless invariably manifests itself in other antisocial ways, including other violent crimes.

We ask that the authorities investigate the source of this video and urge anyone with information about the identity of this individual to come forward right away.

Exactly. Let’s hope this guy gets tracked down and either locked up/given the help he needs before he does anything this bad – or even worse – again. They should probably pull their finger out and try and find the horrific rat eating man of Greenock whilst they’re at it too.

If by any chance you actually know who this guy is, make sure you let the cops know immediately.