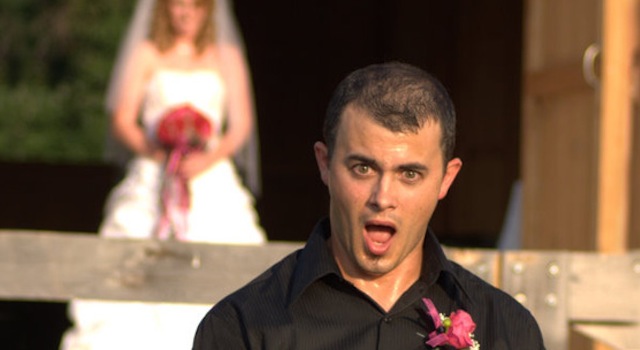 This sounds like the best episode of ‘Don’t Tell The Bride’ ever.

Last week in Essex at the All Saints Church in Hetton, a wedding was delayed after a man ran into the church after cutting his own testicles off. I know they say your wedding is one of the most unforgettable days of your life but this really puts a new perspective on the idea.

The Reverend Bob Wallace and a florist were preparing for the wedding in the church where the dude – who’s name hasn’t been releasedd – burst into the church with blood all over his crotch and his balls chopped off. The guy started throwing chairs around and screaming and generally just being a madman. He was able to be restrained and taken to hospital but obviously the church was a mess and they had to delay the start of the wedding and try and keep what was happening down. Obviously the story was so weird though that everyone knew about it almost instantly when they showed up.

‘There was blood all over the floor just outside the church. When I went in there it was like someone had been murdered. There was blood everywhere. The vicar knew of the man and said he had come into the church as they were setting up. He said the man had chopped his testicles off with a pair of scissors and was going bezerk, chucking chairs around. I’m surprised he didn’t pass out. When I went in the church, I saw something on the floor which I could only describe as flesh, which I thought was part of his arm but that was one of his testicles.’

Grim right? Especially that last sentence. Yuck – you would have thought that that was one of the first parts they would have cleaned up.

The guy is said to be OK now although he’s been referred to a mental health unit. The wedding went ahead albeit slightly delayed and apparently the bride was none the wiser over this incident, which kinda makes this a bit like the best episode of Don’t Tell The Bride ever.