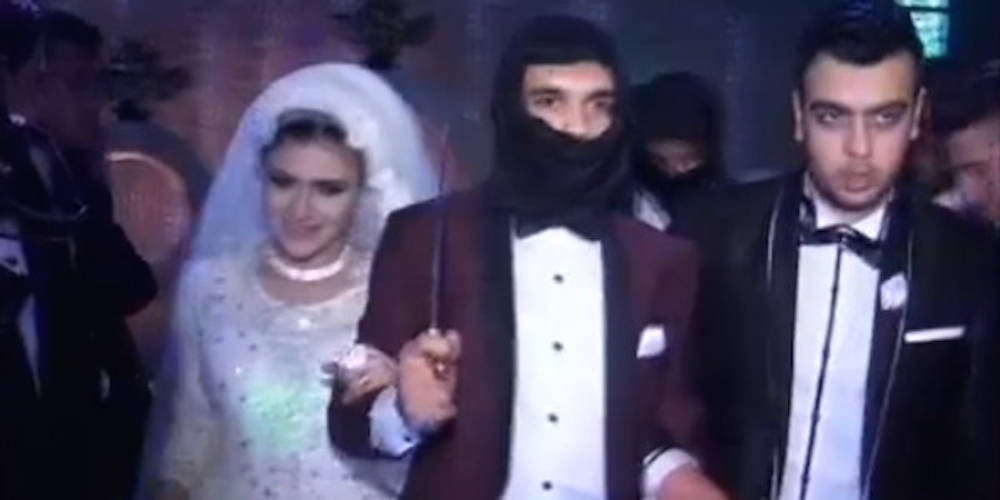 What the hell was he thinking?

You want your wedding day to be one that you’ll remember forever, so it’s only natural that you’ll do everything in your power to make it as special and memorable as possible. However, I’m not sure if staging a fake ISIS invasion as part of it really falls into that remit.

The bizarre idea was the brainchild of groom Ahmed Shehata who had this to say about it:

The idea came to me two weeks before the wedding, because I wanted a wedding night that is… not like everybody else’s.

Well you can say that again as his wedding to Shymaa Daif is hands down the most weird wedding I’ve ever seen. The couple are sitting on the stage when a few of their family and friends storm into the room with knives and headscarfs on and start erecting a cage. The couple are then placed in it and the ISIS beheading music that accompanies most of their videos starts to play.

Obviously all the guests are in a daze/state of shock as this is completely and utterly deranged behaviour and they’re not sure if it’s actually really or not, but their looks of puzzlement fade into further looks of puzzlement as the bride and groom suddenly start dancing to some sick beats inside the cage. After they finally figure out that this was all part of the plan to make a wedding ‘not like anyone else’s’ they join in with the bride and groom and all start dancing. I guess that’s exactly how Shehata imagined it right? Perfect.

Or for anyone with a brain, it’s seriously got to be the number one contender for worst wedding ever. Even these stupid Russian weddings that got photoshopped to make them look good look better than it.