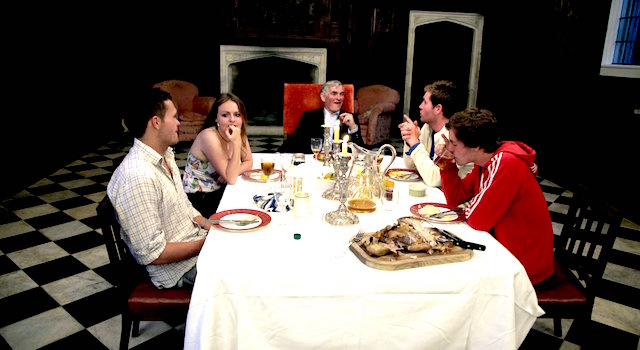 With Made In Chelsea and Life Is Toff polluting our airwaves, will we ever be free of the BBC’s upper class telly?

I’m sure I’m not the only one who’s noticed you can’t fucking move for class-based TV at the moment. Whilst the staples of Jeremy Kyle and TOWIE have come to be accepted parts of British television, the deluge of Upper-class tomfoolery that is currently polluting the airwaves has come as quite a shock to me. Now I can deal with Made In Chelsea, and I must confess I kind of like watching West London’s finest ponce around bars saying funny words like ‘Safe’ and ‘Bro’ to each other, but the BBC’s latest offerings are about as much as I can take of the upper classes.

Now for those of you who aren’t familiar with the Fulford family, I’ll provide a quick rundown. The stars of BBC Three’s newest class-related exploit ‘Life is Toff’, the Fulford family are one of the few remaining members of Britain’s Landed Gentry who still occupy their original estate, in this case, a stately manor in Devon which has stood for over 500 years.

The enigmatic patriarch of the family, Francis Fulford, has been something of a reality TV star over the last ten years, and ‘Life is Toff’ is certainly not his first televised outing. I’m sure I wasn’t the only one to notice that the Fulford family is seemingly a one-parent affair, and it turns out Francis’s wife Kishanda has boycotted the program as she believes the intrusion into home life isn’t worth the fame/money, a realisation she probably had whilst suffering through the Fulford’s first TV outing ‘The F***ing Fulfords’. You can see Francis at his eloquent and agreeable best in the aforementioned show below:

You’ve got to ask yourself what it is about these total goons that the British public finds so intriguing. Is it Francis’s horrendous language? His ridiculous eyebrows? Or his clearly suspect genetic heritage? Whilst the snapback wearing wallies of Made In Chelsea aren’t that different from a lot of average British folks, the Fulfords are clearly a group apart. With their absurd voices and madly unconcerned attitude to the tribulations of daily life, they truly are as different from the majority as one could be.

With the BBC already planning another class-based program for the near future, this to be titled ‘Posh People: Inside Tatler’, concerning itself with the inner workings of Britain’s oldest magazine ‘Tatler’, we’ve got to wonder why we have such an appetite for anything to do with the upper classes in the UK.  And although we might think all of these posh twats are a total bunch of oxygen-thieves, we all watch the shows.

In the lows of a recession we all love to hate the Fulfords of the world, whilst hundreds of Britons are feeling the pinch of the bedroom tax, these bell ends are farting about in a house that could contain most of the homeless people in Peckham. And Jaimie Laing from MIC appears on ‘Famous, Rich and Hungry for Sport Relief‘, when he’s the heir to the fucking McVities Fortune. Come on Jamie, give him a fucking chocolate digestive ya bell end.

Given that we’re all unwitting slaves to the class system which is such an unavoidable part of British culture, I can’t help but see the appeal of all this toff television. It’s all about aspiration, whilst we might not all want to be estate-dwelling nutcases who sound like characters from a wartime film, who of us wouldn’t want to spend our days Made In Chelsea style farting about in Fulham with someone else’s money? But with that being said, the BBC needs to stop shoving this shit down my throat before I start talking about ‘Bongo Bongo’ land and voting for UKIP to avoid the inheritance tax.