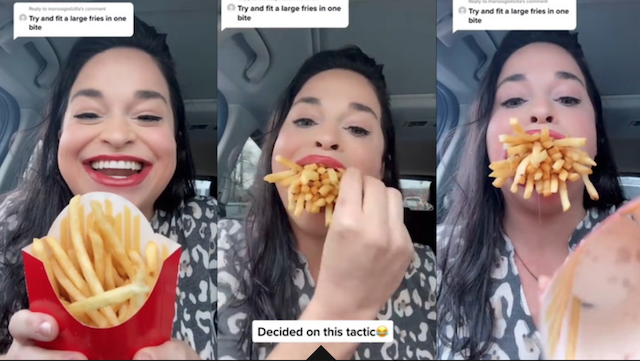 What a humongous mouth.

I don’t eat at McDonald’s very often, but when I do you’ve gotta get a large fries with your meal because you’ve gotta do it properly and make the most of it.

I’ll normally scoff down my fries fairly quickly, but I’ve got absolutely nothing on the woman in this video who places the entire contents of the fry container (is that what you call them?) into her mouth and every single one of them fits int here. What a gigantic mouth hey?

That’s really rank. If you’re interested about the identity of this woman, then I can tell you that her name is Samantha Ramsdell and she resides in Connecticut over in America. She claims that she’s got the biggest mouth in the world, saying that it’s four inches wide when she opens it up fully, but the Guinness Book Of Records have yet to verify that. The current world record holder only measure 3.75 inches, so if she’s telling the truth then it shouldn’t take too long to get that sorted out, although I’m not sure if she’s even that bothered about that as she’s currently raking it in on TikTok with most of her videos having at least a million views.

For more of the same, check out this 14 year old boy who was named the person with the biggest mouth in the world a couple of years ago. It’s massive.