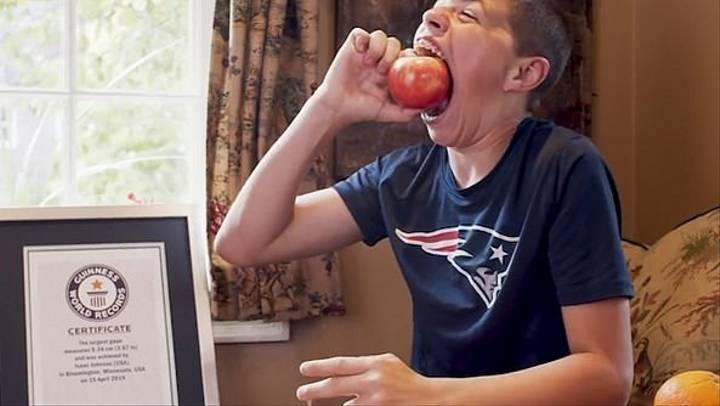 They say that everyone in the world is good for something and for 14 year old Isaac Johnson, that something is having the world’s biggest mouth.

Hailing from Bloomington, Minnesota –  and I guess therefore possibly the result of inbreeding – Isaac made the discovery at age 14 after slowly coming to realise that his mouth wasn’t like other people’s. He looked up the current holder of the world’s biggest mouth and saw that it was only three centimetres off his.

It was then only a matter of time before he grew into the title. What a hero.

Here’s what Isaac had to say about officially being recognised as the person in the world with the biggest mouth:

Actually being in it seems unreal.

I don’t know what the future holds but if I could attempt a record, I’m really good at the chubby bunny game.

Chubby bunny game? Apparently that’s an American game where you stuff marshmallows into your mouth until you can’t say Chubby Bunny without them falling out. Sounds like something to aspire to there for Isaac, sure.

For more of the same, check out scientists discovering our earliest ancestors had a giant mouth and a massive anus. Glad evolution sorted that one out.