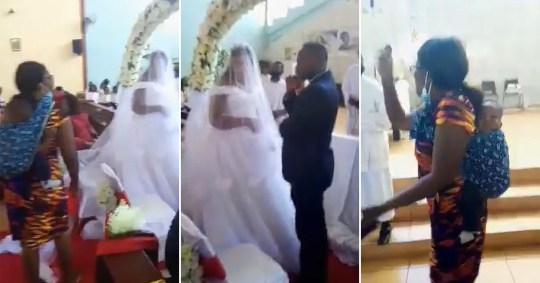 I guess it must be every groom’s – or bride’s to be fair – worst fear to have their wedding interrupted and cancelled for whatever reason, but things really can’t get much worse for the guy in this video after his real wife and children rushed in to interrupt the ceremony.

The footage comes from over in the Catholic church of Chainda in the Zambian capital of Lusaka, where Abraham Muyunda was getting married behind the back of his real wife and kids. He had told his wife Caroline Mubita that he was going out of town for the day, but she eventually heard about the nuptials going ahead from neighbours and rushed to the church to try and put a halt to proceedings.

It looks as though she succeeded but you can make your own mind up and check out the scenes that went down below –  it’s safe to say that it’s a complete and utter mess though. Muyunda’s reaction is probably the best as he firmly places his head in his hands and looks like his whole life is over after his wife barges through the congregation to directly confront the priest and try to force him to stop the ceremony:

Brutal, but I’m at a loss at how Muyunda ever thought he was going to get away with this. I suppose if he had managed to have an affair for long enough without his wife knowing to convince someone else to marry him, then one extra day might not have been stretching it too much, but surely if you were gonna make it official you would do so in a small private ceremony to prevent anything like this happening and just to get it over the line?

Seems really naive from the guy that he could have pulled something like this off without a hitch, although it’s being reported that his new bride knew all about the fact he was married and paid for the ceremony himself, implying that maybe Muyunda wasn’t too keen on going through with it in the first place. Sounds like he was a bit whipped to be honest.

The guy is now in police  he is found guilty of bigamy then he could face up to seven years in jail. Hope that piece on the side was worth it pal.

For more of the same, check out this woman who tried to make her guests pay $1500 to attend. No that’s not how it works pal.