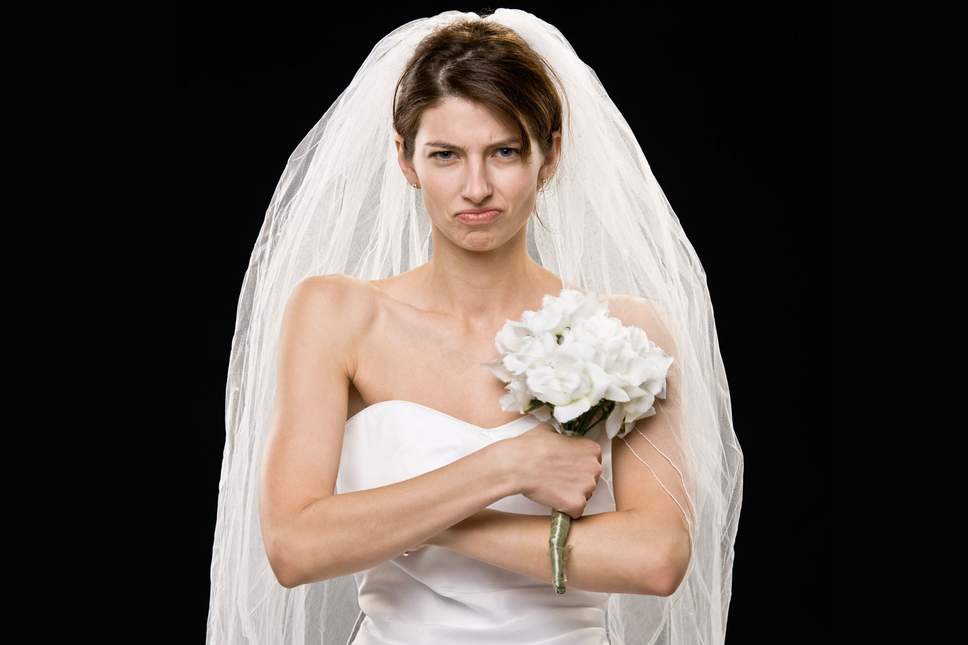 Everybody knows that your wedding day is going to be one of the most expensive things that you ever spend money on, but I don’t think anyone has ever expected their guests to contribute an obscene amount of money just to attend it. Except for the woman in this story that is.

This story was posted by Twitter user 0lspicykeychain (who has seemingly deleted their account since then) after it had been posted in a Facebook group where people actively shame the weddings they have attended. Whilst that doesn’t sound like a great way to spend your time, this story most definitely deserves to be in there. Get a load of this (the penultimate page hasn’t been screenshotted so you don’t hear the end of the story which is a bit annoying, but you’ll still more than get the gist of what’s going on. Kind dumb they missed it off tbh: 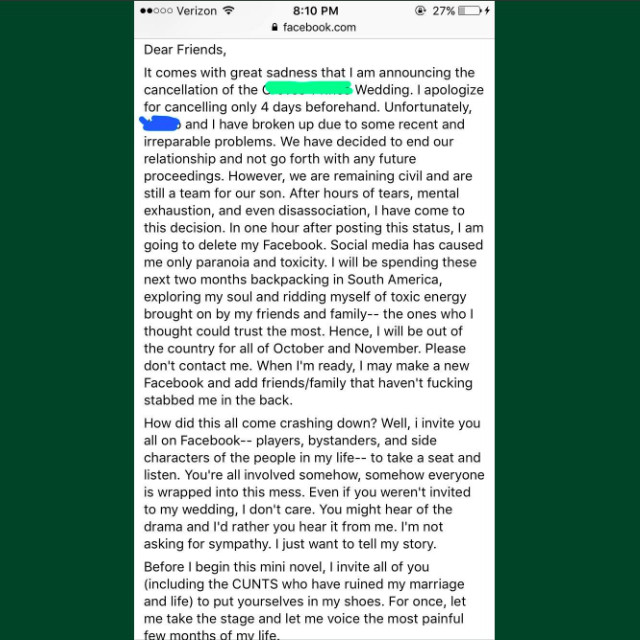 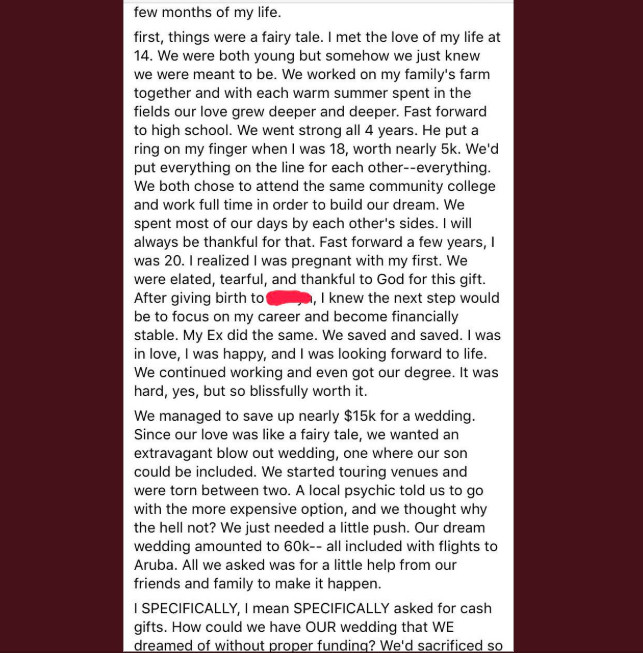 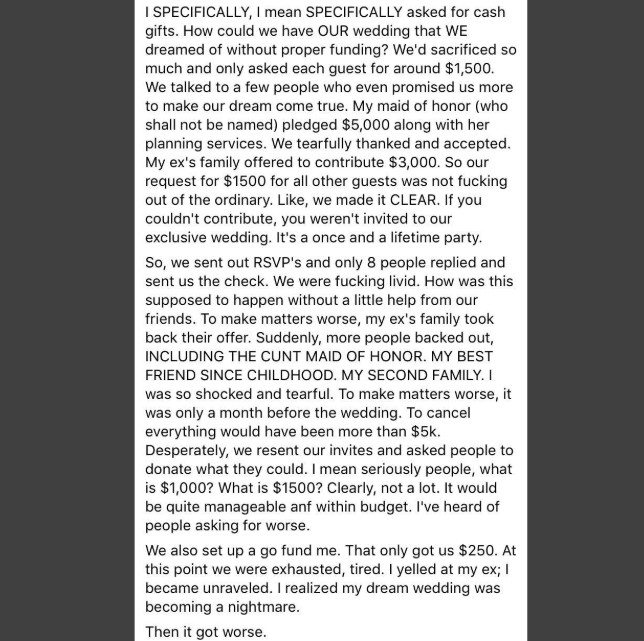 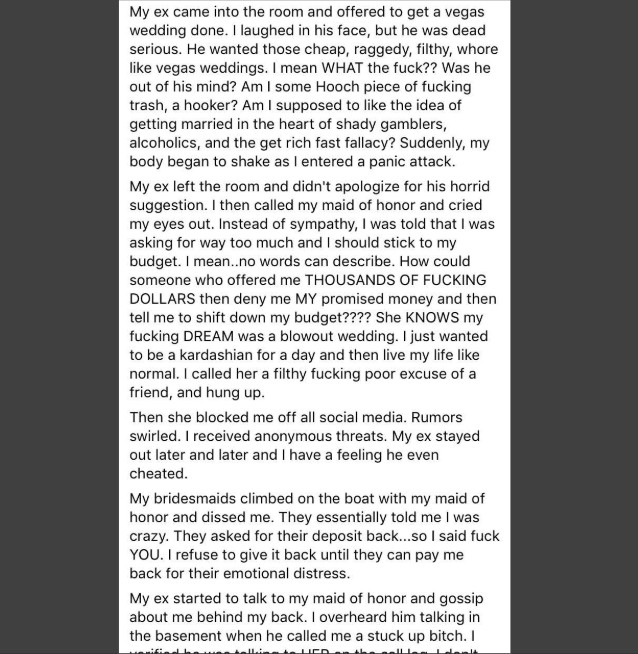 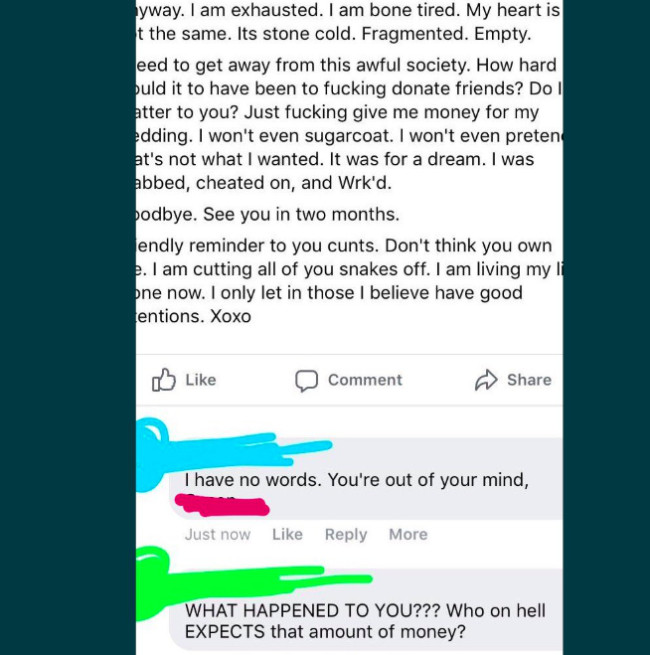 Hot damn I have never heard of anything as entitled and ridiculous as that ever. It sounds completely ridiculous that even eight people said they would pay that to attend her wedding and that her maid of honour pledged to give her $5000 as well. Just doesn’t really seem like it makes any sense to do that whatsoever from anyone’s perspective. Just go have a wedding you can afford you dumb idiot. Or wait a couple of years until you can actually afford the one that you want you little bottom feeder.

Awful, awful behaviour – kinda glad that her wedding got cancelled, although I’ve got a sneaky suspicion that she’s probably used the money that some crazy people actually did give her for her wedding to pay for her trip around South America. Bitch. Sure she’ll be regaling every youth hostel – sorry five star hotel – in the continent with her sob story but I doubt anyone will be sympathetic towards it.

For more weddings, check out this bride who went to McDonald’s on her wedding day. She should have just done that.