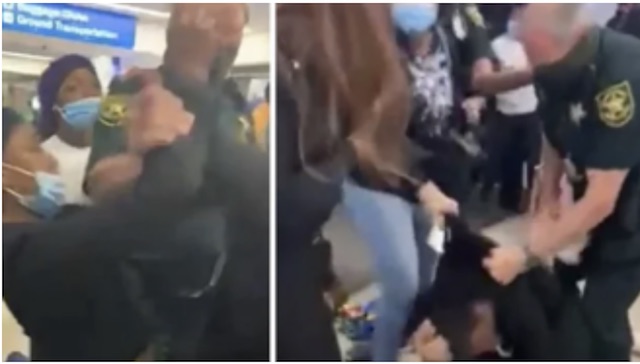 When are people going to stop doing this?

We all know that there are some kooky characters down in Florida after covering them on the website for the past ten years and here is yet another video that confirms everyone who resides down in the sunshine state is pretty much legitimately insane.

We’re at Fort Lauderdale Hollywood International airport for this one where a humongous brawl kicked off recently, after a crowd decided to boo a crowd of women who were kicked off a plane for not wearing masks as they were attempting to leave the area and head back to Chicago following their little spring break holiday. Turns out that they had forced everyone to deplane because of their refusal to wear masks, so the crowd probably had every right to boo them.

Eventually two policemen managed to break it up and escort the anti maskers away, but there was a serious brouhaha before we got to that point. Take a look at the action below:

Damn she got some serious shots in there before the whole thing got broken up didn’t she? Not really sure why people still think it’s OK not to follow the rules regarding masks when it’s going to end up with situations like this – how hard is it to wear one for a couple of hours on a flight? – but here we are after a year and it shows no signs of stopping. Go humanity.

For more of the same, check out this woman justifying not wearing a mask by saying pants don’t stop farts. Errrr?