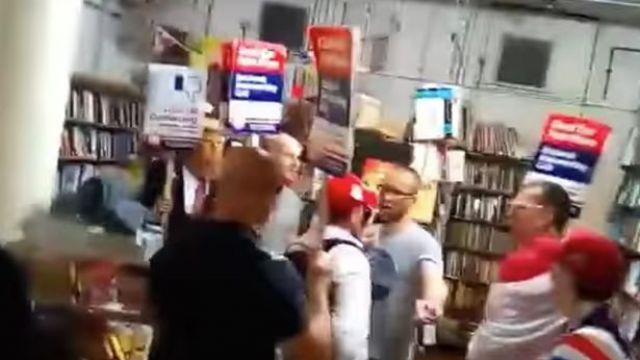 It’s fair to say that there’s a lot of hate speech in this country right now unfortunately and incidents where mobs of people attack and ambush people who have differing political values to them are becoming more and more common.

The perfect example is this video from the weekend in which a three UKIP members decided to storm Bookmarks – the UK’s biggest socialist bookshop – alongside other gang members and mob the owners, shouting how they love Donald Trump, destroying their books and accusing staff of being paedophile lovers. When asked why they did this, the gang said that it was because the bookshop was selling books whose content they did not approve of, which kind of reminds me of Nazi Germany, what about you?

The video is about 12 minutes long but it’s well worth watching on your break or something to see what a shitshow this all turned into:

So pathetic and petty, but also kinda scary that people are doing that on our streets today. The staff themselves sound especially terrified, saying that nothing like that had happened in the past fifty years pretty much, saying the following to JOE:

There were only two of us in the shop, it was quite late in the day and they were about to close and they were shouting and bellowing – scaring off the few customers we had.

They knocked over the displays and tore up magazines and newspapers. We asked them to leave and had to ring the bell [to get them to]– they were wearing caps and banners saying ‘Make Britain Great Again’.

This hasn’t happened to us since the 1970s when the shop was attacked by the National Front. They feel emboldened and able to do this sort of thing, I think the Alt-Right movement generally feel empowered to do it. What they were saying wasn’t logical.

I mean I can’t really agree with that last statement. UKIP themselves distanced themselves from the incident, with party leader Gerard Batten saying the following:

The whole incident was utterly moronic and disgraceful. The party is now considering whether it will take action on the three UKIP members in the footage.

Following this statement it was announced that Elizabeth Jones –  a member of the party’s National Executive Committee – Luke Nash-Jones and Martin Costello had all been suspended whilst they investigated the incident. I suppose that’s positive, but it does kinda imply that at least some of the UKIP party is completely and utterly adverse to listening to anyone else’s opinions and borderline fascists and that isn’t exactly a great sign of the current state of the country. That isn’t really anything we didn’t know already though, is it?

For more of the same, check out this desperate attempt by them of trying to prove they’re not racist. Awful.