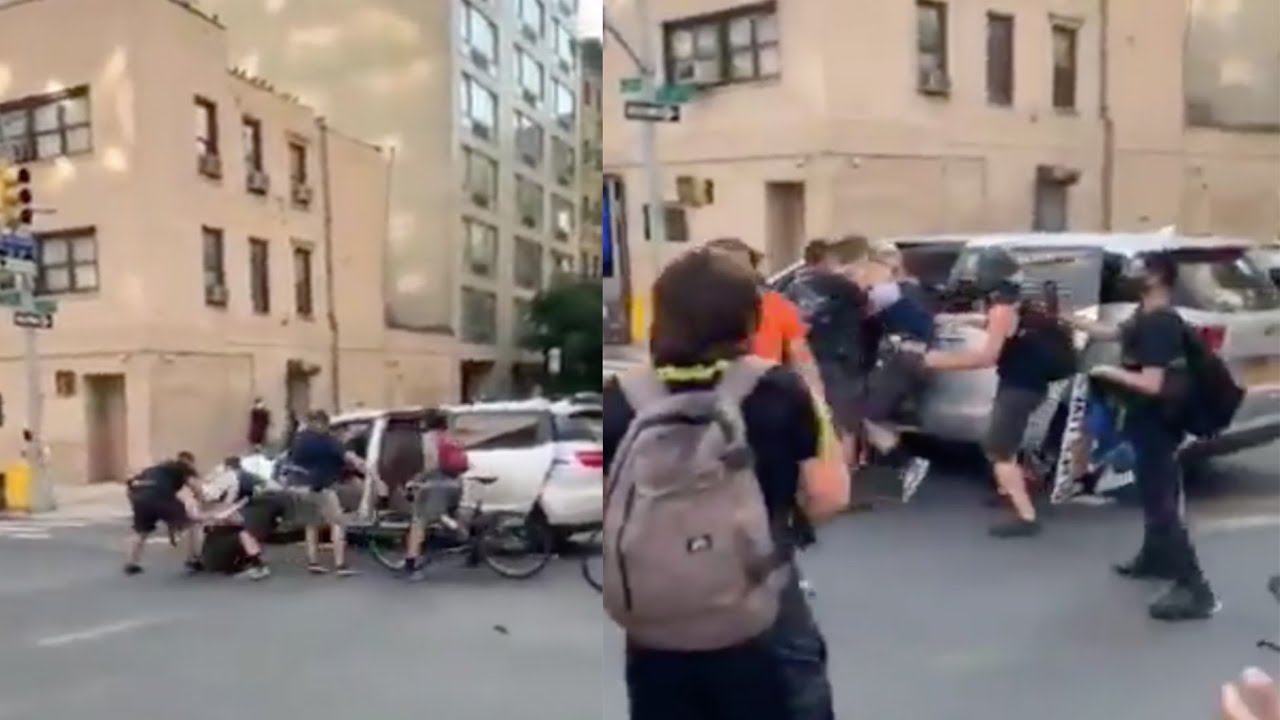 In the last couple of months, we’ve seen the whole world (seemingly) protest about the Black Lives Matter movement and then most of the action being confined to Portland, where it seems like the National Guard was called into to completely annihilate everyone. (I gotta say the protesters probably weren’t blameless in this as I think they burned down a police station and occupied another one? But anyway this article isn’t about that – I encourage you to Google it and do your own reading and make your own mind up)

Turns out that everything that was going on in Portland is spreading all over the United States, as the video below shows a trans femme protester in New York City get picked up by police – at least we think they’re police – in an unmarked car and then drive off. It’s pretty disturbing and scary footage to be honest, especially with all the bike cops backing up the plain clothes cops and beating up anyone that tries to help them:

NYC is taking after Portland – a trans femme protestor was pulled into an unmarked van at the Abolition Park protest – this was at 2nd Ave and 25th Street pic.twitter.com/1PDhSYuK9h

That’s terrifying, right? I’m sure that anyone who disagrees with these tactics will argue that the police were just doing their job and picking up a dangerous criminal and this is exactly how they’re responded via their Twitter account, arguing that the woman in question was wanted for criminal damage of five police cameras. They insist that they were so forceful as they were confronted by other protesters and had to protect themselves:

When officers from the Warrant Squad took the woman into custody in a gray NYPD minivan this evening, they were assaulted with rocks and bottles. The Warrant Squad uses unmarked vehicles to effectively locate wanted suspects.

This version of events is obviously disputed by everyone else in attendance. They’re all saying that they were eating pizza and riding skateboards, marching down the street to Madison Square Park, when they plain clothes cops out of nowhere and pepper sprayed them and attacked them. There’s another couple of videos of that floating around as well:

Another angle of plainclothes officers pushing a protester into a minivan on 2nd Ave near 25th earlier tonight. “We were skateboarding and eating pizza,” said one witness. “We didn’t see where they came from. All of a sudden they grabbed Nicki. It was like a kidnapping.” pic.twitter.com/rzymNjlVVo

Here’s my full video of what happened on 25th & 2nd in NYC! Keep in mind this was a peaceful protest that was headed to Madison Sq Park for a meditation & an unmarked van snatched a protester & NYPD started attacking us! #BLM pic.twitter.com/USUGgIDDIH

Not really sure what to make of this. It sounds like the girl probably should have been picked up for questioning if she’s a suspect in a criminal damage case, but I don’t think the cops picking her up in this way is going to aid the situation in any way whatsoever.

It literally looks like they’re kidnapping someone because of the methodology and the fact it’s an unmarked van and when tensions are already so high in the country, they should really be doing everything they can to de-escalate the situation rather than stunts like this that are only gonna cause more tension and division. Can someone please give them a clue on how to act so we can stop talking about stuff like this?

For more of the same, check out some UK protesters attacking police from about six weeks ago. Seems like such a long time ago now.