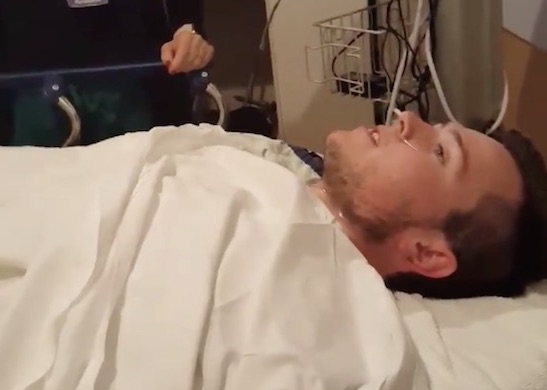 When the morphine kicks in.

Painkillers are one hell of a great invention because there’s gonna be a time in your life when you’re in absolute agony and they will just make all of that go away. Unfortunately you’ve gotta watch out for the side effects though.

Case in point: the video below. Some unlucky dude has managed to break both his femur and pelvic bone and there’s clearly no other option but to pump him full of morphine to take his mind off it. This leads to him talking absolutely gibberish and asking the nurse to whip her boobs out for him.

Fortunately, the dude’s dad was there to capture the incident in all of its glory. Awkward:

Jokes. It’s kind of mean this his dad is just filming him and ripping him to pieces – and probably will do for years to come at family gatherings when he inevitably pulls this video out to show everyone – but when it’s as funny as this I think you can let it slide. Honestly rate the dad for completely rinsing him like this and having this video over him for the rest of his life. A+ dastardly behaviour there.

For more nonsense from people on painkillers, check out this girl after her visit to the dentist. Absolute scenes.