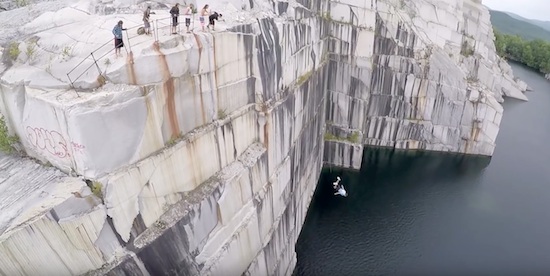 Taking it to the next level.

Cliff diving is something that I don’t think I’ll ever take part in because I’m shit scared of heights, but that doesn’t me an that I don’t enjoy it immensely when I see videos of people doing the kind of stuff that I would never dream of.

This is one of those videos where fifteen of the wildest cliff divers from America all decide to converge on the quarries of Vermont for a four day party tour of some of the sickest cliff diving spots in the whole of the United States. This looks like a seriously fun time, with some of the most beautifully clean water I think I’ve ever seen:

Yep some seriously slick jumps there and what a soundtrack to get you pumped up for it eh? Those guys look like they have the best of times doing this shit – if only I had the balls to join them. Maybe one day.

For more of the same, check out Nathan Roberts performing some of the most insane cliff dives ever in Northern Vancouver. Gnarly.