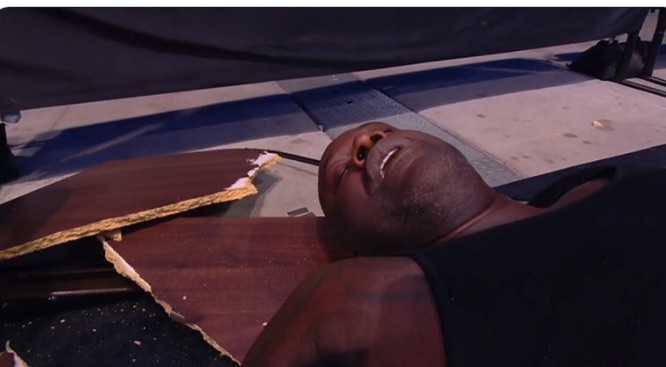 I haven’t watched wrestling for a very long time, but I’ve gotta admit that the new AEW federation has perked my interest as they seem to be doing a lot of cool entertaining stuff with it and I often find myself clicking onto it on Monday nights on ITV.

However, I’ll admit that I wasn’t up to date with it enough to know that Shaq was wrestling with them now and was taking part in a big tag team match last night, teaming up with Jade Cargill to take on Cody Rhodes and Red Velvet. Shaq actually managed to pick up the win in the match, but ended up pretty badly beaten up after Cody Rhodes slammed him through two tables in a pretty sweet spot that you can see below.

Shaq also managed to do a pretty nice power bomb on Rhodes too before he got KOed:

WE HAVE A SHAQ TABLE BUMP pic.twitter.com/hUg9BBkjbJ

See what I mean? Looks like it was actually a pretty entertaining match and Shaq doesn’t look like he wasn’t pulling his weight in it either.

His team actually ended up getting the win, but Shaq sold the fact that he got put through a couple of tables and was taken off on a stretcher into an ambulance. But then guess what happened?

Cracking up at Shaq having to bend his knees so they could close the ambulance door pic.twitter.com/T7blaZWLVY

Lol. Love it when they do stupid stuff like that on wrestling storylines. Where the hell could Shaq have gone? Oh my gawd, he’s in the back of Cody Rhodes’ car! Maybe I should start tuning in more often.

For more of the same, here’s when Sting debuted on AEW. Told you they were doing quite a lot of cool stuff on the show.